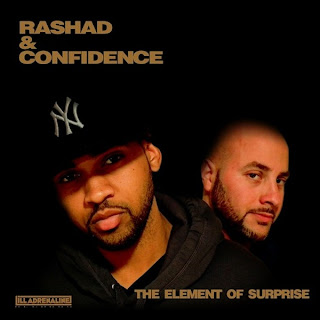 Another fresh up-and-coming act this year is the duo Rashad & Confidence, the former being an emcee from Brooklyn while the latter is a Philly native that handles turntables and production. What first drew me to this album was the artwork with it's obvious nod to Lord Finesse & DJ Mike Smooth's classic debut "Funky Technician" and I've been eager to hear it since then. A couple days ago I had my first listen and there's definitely some dope shit on this just released LP, titled "The Element Of Suprise". Very soulful music with lyrical substance that packs a big nod to the true school sounds of the '90s. It's great seeing the one MC / one DJ (slash producer) making something of a comeback this year through both debuting and established artists!
"The Element Of Suprise" is out now via Ill Adrenaline Records and can be purchased at a bunch of places, including UGHH. Below is a little taste of what to expect as you can grab a download of the single "Understand" and hear for yourself.
RASHAD & CONFIDENCE - "UNDERSTAND"
Posted by lost.tapes.claaa7@gmail.com at 2:57 AM