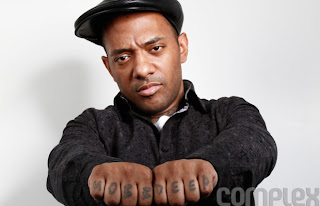 Since Prodigy got released from the belly of the beast he's been heavy at work in the studio. The latest Mobb Deep album "Black Cocaine" didn't have much to show for although it had a couple of songs that was heavy as hell. He also spat impressing verses on albums like Evidence's latest, the Currensy/Alchemist EP and much more so there's no question he still can when he wants to. Matter of fact I need to make a compilation of all the great P stuff that's been released since his new won freedom.
Today another little gem from Albert Johnson hit the net, which might be lifted from a forthcoming third sequel to "H.N.I.C.", and is called "When U Up". Link spotted @ 2DopeBoyz,
PRODIGY - "WHEN U UP"
Posted by lost.tapes.claaa7@gmail.com at 4:39 AM

Email ThisBlogThis!Share to TwitterShare to FacebookShare to Pinterest
Labels: Prodigy