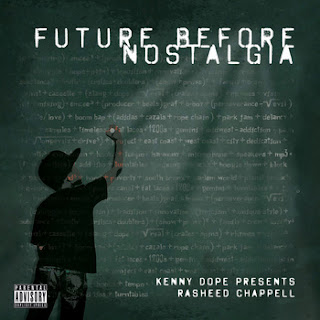 Just like every year, there's some good new underground scenes that makes their mark on the scene, but if you ask me it's today a rare occassion when a young up-and-comer comes through with what I guess will be a future classic debut album. New Jersey emcce Rasheed Chappell is the exception to that rule in 2011. Chappell's voice and delivery is laid-back, a little nasal and distinct and charismatic. And for the actual lyrics they are very clever and well-written, brutally honest, dealing with a number of topics ranging from government conspiracies and looking sharp. Bottom line is that all throughout the album Chappell is keeping it #100 real - it's clear he never tries to be someone he ain't - he even rather use his birth name than an artist alias.

The story of Rasheed Chappel as a serious artist (read my interview with him for further info), leading up to "Future Before Nostalgia" was when he met underrated DJ Kenny "Dope" Gonzales. The hip-hop, funk and house producer, who was once part of Masters @ Work with "Little" Louie Vega, had been missing from the hip-hop scene for some time until he met Rasheed. The two instantly clicked on both a personal and musical level and the emcee became the first signee to Kay-Dee Records and as a result Gonzales also produced Chappell's album front to back. A very wise decision indeed it turned out. As dope as Rasheed are on the microphone, the musical chemistry between him and Gonzales are something absolutely extraordinary and in all fairness I would say that this is a true collaboration between the two, rather than a solo record by an emcee produced by one guy.


From the introspective opening "Invocation" to the similair closing joint "Thankful" the album never gets boring and the rhymes and beats are always on point. This album needs to find its way to vinyl; hopefuly we could get a very limited run because I would buy it in an instance. Right when the album dropped, I wrote a longer more analytical review that the artist himself absolutely loved, so rather than break it down more here, you can read my original review here.
Posted by lost.tapes.claaa7@gmail.com at 1:39 AM