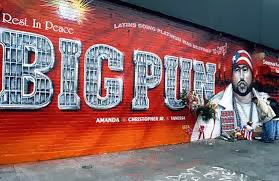 Justice over @ 2DopeBoyz just posted this, so I figured I'd borrow it for The Lost Tapes as well since it's great to get to hear "new" ish by The Punisher. "Still Not A Player" is of course considered a real classic but to me I really prefer "Capital Punishment" without it since the only thing it manages to do is to annoy me. The original Minnesota mix though? Now that's another story completely... But back to this rough demo version which apparantly originally was dug up by DJ Soul and made the mixtape rounds. This version also features additional vocals by Cuban Link and is overall a cool listen.

As a lil' bonus I also uploaded a related track which never made it to the final version of "Capital Punishment" though it most definitely should have - matter of fact, when I upload the album to my iPod I usually delete "Still Not A Player" and replace it with this track. "Wishful Thinking" features Big Pun, Kool G Rap, Fat Joe and B-Real going crazy over a hard to the core Showbiz production. A crazy posse cut if I ever heard one, and how this didn't make the LP is forever beyond me (it was placed as the B-side to the "I'm Not A Player" 12").