There's no questions anymore that Roc Marciano is the hardest working man in hip-hop right now, something that most of the time lead to a lack of quality material, but Roc is one of those rare artists that have absolutely zero problems balancing quantity and quality. Since mid-2010 he has released four quality albums (including the free "The Pimpire Strikes Back") and a couple of EP:s, including his just released "Marci Beaucoup" which personally is my most played record at the moment a long with MF Grimm & Drasar Monumental's masterpiece album "Good Morning Vietnam". Before fans even had a chance to let the last brilliant Man Bites Dogs album sink in, the Strong Island emcee teams up with rising underground label EFFISCIENZ and talented DJ Brans for a six track remix EP that's out on wax in a limited 500 pressings edition now - with digital edition following on January 14. Check the artwork and tracklist below and order your limited copy via the label link above whether you simply want the 12" for £11.99 or an autographed copy of the way more limited test pressing for the price of £29.99. No matter what, this sounds really dope so TURN THAT TRAILER AT THE TOP OF THIS POST WAY UP while we're waiting for the delivery or digital copies. 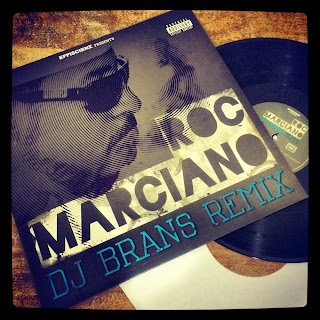