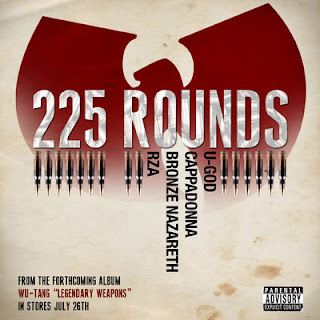 RZA is preparing the release of "Wu-Tang: Legendary Weapon", which he is the executive producer of, which will find its way to stores everywhere on July 26. It's easy to get fooled into thinking this is an actual Wu-Tang Clan album, which it is not. This is the actual follow-up project to 2009s "Wu-Tang: Chamber Music" which saw a majority of the Clan rappers collaborating with other legendary NYC emcees over live instrumentation performed by The Revelations. The concept seems to remain on this disc and both this song and the previous single, "Only The Rugged Survive", is again credited to producer Noah Rubin and MOP's Fizzy Womack. Tracklist and download link below.
01. "Start The Show" (Ft. RZA & Raekwon)
02. "Laced Cheeba" (Ft. Ghostface, Trife & Sean Price)
03. "Diesel Fluid" (Ft. Method Man, Trife & Cappadonna)
04. "Played by The Game"
05. "The Black Diamonds" (Ft. Ghostface & Roc Marciano)
06. "Legendary Weapons" (Ft. Ghostface, M.O.P. & AZ)
07. "Never Feel This Pain" (Ft. U-God, Inspectah Deck & Tre Williams)
08. "Angels Got Wings"
09. "Drunk Tounge" (Ft. Killa Sin)
10. "225 Rounds" (Ft. RZA, U-God, Cappadonna & Bronze Nazareth)
11. "Meteor Hammer" (Ft. Ghostface, Action Bronson & Termanology)
12. "Live Through Death"
13. "Only The Rugged Survive" (Ft. RZA)

Email ThisBlogThis!Share to TwitterShare to FacebookShare to Pinterest
Labels: wu-tang