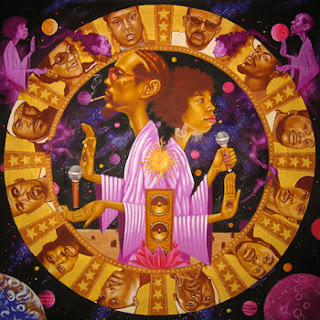 G&D is the duo project between two of our times most intersting soul singers with a strong love for t he hip-hop music. The G stands for Georgia Anne Muldrow, an LA singer that's never afraid to experiment in her music and is the best thing that happened to the genre since Erykah Badu if youa sk me; I bought her debut album "Olesi: Fragments Of An Earth" a few years back and really liked it. She's heavy on the boards too, which is a rare thing for a female in this genre of music to be honest.
Dudley Perkins a/k/a Declaime is also a Stones Throw artist who released two beautiful albums fully produced by Madlib. The Oxnard, California native both raps and sings and while he's not a prodigy at either talent his material is definitely enjoyable to my ears. And spiritually these two artists seems to be connected so it only seemed like a matter of time before they started a project together. The result was 2010's full-length LP "SomeOthaShip" which is most definitely worth at least one serious listen.
Since yesterday until next Friday they are giving away the album for free downloads via Bandcamp so trust me and take your chances with it wile it's still there. Production comes from the likes of Black Milk, Oddisee, Oh No, Flying Lotus and the artists themeselves plus we get to hear ill guest verses from guys like G Rap, MED and LMNO. So what the hell you're waiting for? The soul game is too diluted these days but if you just know where to look, quality soul and R&B are still being made. Fuck that MTV bullshit!
G&D - "SOMEOTHASHIP" (FREE LP)
Posted by lost.tapes.claaa7@gmail.com at 1:53 PM