Back in February of 1992, Boogie Down Productions released their final, which to me was probably their absolute finest, album. It is either this or their debut based on its impact. "Sex & Violence" was, as its title suggest, easily the most agressive and controversial LP the crew have ever recorded., Lead emcee KRS-One, hadn't dropped a true hardcore, yet conscious album, since he first debuted with the late DJ Scott La Rock for '87s "Criminal Minded". Through the years that had passed since Scott La Rock's tragic killing, B.D.P. had gone through a rotating cast of members and several changes in sound. The majority of them hardly contributed to the music as far as either beats, rhymes or writing goes. The three albums between the aforementioned LPs could more or less be seen as KRS-One solo albums. He was credited for all the production, 98 percent of verses and writing, mixing and arranging. The engineering was handled by D-Square and 'Doc' Ivan Rodriguez (something that these days would most likely give them both a co-production credit). 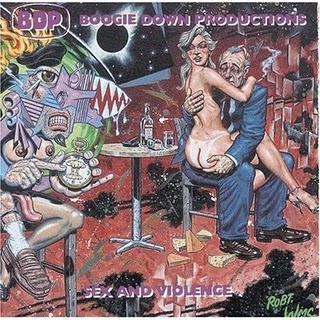 "Sex & Violence" had all the right elemenents from a slamming BDP album; coupling the social commentary of "By All Means Necessary", "Edutainment" "Gheto Music" and injecting darker topics, more thumping beats and overall a much harder edge. Both lyrically and production-wise, that is. The themes deals with things like black drugdealers needing to give something back to their community; the hoax of religions and the way they control peoples minds; metaphysical teachings; the I.R.S. treating people like whores; debunking 5% terminology in favor of humanism. There's even a twisted tale of a 13 year old girl with the apperance of someone much older and her homosexual police father trying to lure our hero into bed. This is just to name a few of these creative songs, each track on the entire LP basically got its own theme and KRS never repeats himself over the 60 minutes the LP clocks in at. Kris Parker has rarely been in such high spirit and flowing as viciously he does on this neck-breaking album.
The quotables is plenty and lyrically it's no short of a masterpiece - high-powered battle rhymes ("Duck Down" and "Ruff Ruff" where KRS and Fredie Foxxx trades bars over a breakbeat banger provied by D-Square), the old-school block party tribute ("The Original Way", also with Foxxx), the way TV and mass media corrupts young peoples mind through sex and violence ("Sex & Violence"), groupies screaming rape to get that cash ("Hey Gal"), etc.

A very well-rounded album in other words, and one that, to me, is the true sequel to "Criminal Minded". It has a large dose of that hardcore street elment that was missing from many of the previous BDP albums while still maintaining much of the conscious lyrics that was found on those. It's the pinnacle of what KRS-One and Boogie Down Productions was capable of doing and what made them one of hip-hop's most hailed and legendary acts. To me, this and the following "Return Of The Boom Bap" was KRS at his absolute peak as an MC and as a teacher, and they both features the best body of work he ever rhymed over.
For "Sex & Violence", Kris updated his approach to creating an album; one that would reflect the start of something new. Rather than producing the entire album by himself, he invited legenary Prince Paul and the crazily underrated DJ Kenny Parker and Pal Joey (who did "Love's Gonna Getcha" the year before, and"Black Cop" on the CB4 Soundtrack) to handle the bulk of beats. The other three joints are provided by long-time engineer D-Square and KRS himself. While Kris is unquestionably a skilled producer, this was definitely one of the main things making the album stand out from previous LPs as it created a new, fresh sound for BDP. Every beat on the 15-song disc consists of raw, gritty and heavy boom-bap which, of course, makes them the perfect pallette for the agressive vocals Kris paints over them. Front-to-back listen is invitable and the soundscapes are really stripped down, back-to-basics type of shit with a modern twist on it (for being '92 that is). The rhythm section is at the forefront with the bass, the drums and Kris's vocals being the three MVPs; a recipe that would continue on 1993s  "Return Of The Boom Bap". And both these albums are in fact the epitome of what early '90s boom bap is supposed to sound.
1992 was an incredible year for hip-hop music (Pete Rock & CL Smooth, Lord Finesse, Showbiz & AG, Kool G Rap/DJ Polo, Gang Starr, Diamond D and many other classic LPs) but if you ask me, "Sex & Violence" is easily one of the top 3 records of that year (only topped by "Mecca & The Soul Brother" and "Runaway Slave" and possibly tied with "Daily Operation"). Unfortunately the LP was the least succesfull of all the B.D.P. albums up to that point and the reason had more to do with issues other people were having with KRS than the quality of the music. After throwing Prince Bee of PM Dawn of the stage and bumrushing it with a big entourage while going into "The Bridge is Over", made labels scared of the G.O.A.T.s unexpected antics and didn't promote the LP like it should have been. Similary the classic "Build & Destroy" was stepping on a lot of toes as he's bascially debunking large chunks of the 5% terminology which were extremely popular in hip-hop circles at the time and simultaneously it was a diss to X-Clan, and to a lesser degree Poor Righteous Teachers, who previously criticized KRS for being a sell-out and disagreed with his humanism stance.
The Source rewared the album with 4.5 mics which it's definitely deserving of; if not 5 (especially considering the inferior "Edutainment" was rewarded with the highest rating). I've seen plenty of people complain at forums and newsletters how ridiciolous it was for the magazine to give "S.&.V" a 4.5/5 rating while the critically acclaimed follow-up "Return Of The Boom Bap",  which was in 50% produced by Gang Starr's DJ Premier, "only" managed to get a 4 mic rating. I think that's just stupid, I agree that the "Boom Bap" LP absolutely deserved 4.5 mics but if it had, I think "S.&.V." would be well deserving of the 5 mics it never got. It wouln't suprise me if it's DJ Premier fans who's the most upset about that, but let's face it - the main producers of Prince Paul, Pal Joey and Kenny Parker did an excellent job of supplying KRS-One with the perfect canvas for him with bangers like the title track, "Poisonous Products", "13 & Good", "Build & Destroy", "Duck Down" and basically the rest of the album. To me this might just be KRS-One's finest album of all time; "Criminal Minded" is of course the most influential but as far as music I feel like revisiting over and over again I might give the edge to "Sex & Violence".
Back in the early '90s and late '80s, artists actually cared about their 12" releases and always packed them with dope remixes from the album and non album B-Sides. Besides of course instrumentals and accapellas for the DJs. I inclued a .rar file of the three album singles's (you can see the vieos above in this post too) B-Sides for y'all to enjoy while reminiscing on this gem which is a true tesament of why KRS-One should always be inclued in any list of greatest MCs of all time. The Ali Shaheed Muhammad Tribe Called Quest remix of "We In There" is especially dope to me and even superior to the album version which is saying alot. The non-album cut, "Feel The Vibe, Feel The Beat" is nothing to fuck around with either. I also aded "Black Cop" from the 'CB4 Soundtrack in 1992; although it appeared on the '93 album I found it interesting that it was here listed as a Boogie Down Productions song and is soley credited to Pal Joey for production. Enjoy, TURN IT UP and dust of your copy of "Sex & Violence" and realize how underrated of an album this actually was and still is.