Erykah Badu in the mix 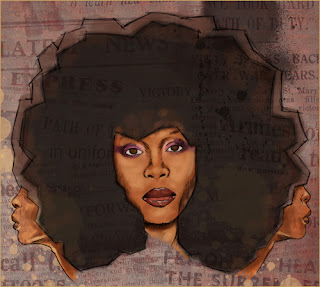 I'm usually not a big fan of "greatest hits" mixtapes so to speak, since I'm all about full-length albums. But if you're not that familiar with Erykah Badu I guess this could be a great start since the mixing is tight and there's plenty of classics included. And for the hip-hop diehards that never would consider listening to an R&B or soul record maybe they'll realize that Erykah is true school hip-hop all the way; much more so than, say, Rick Ross, Drake and all that other bullshit. If you haven't picked up her latest offering, "New Amerykah Part Two: Return Of The Ankh", you can order it from Amazon or whatever; it's a dope LP well worth hearing.
As for the mixtape, it's called "Greatest Vibes" and is divided into two sides just like a vintage cassette tape. Side A is compiled and mixed by DJ Corey Grand while DJ Warren Peace is handling the B-side. "With an emphasis on selection with 2 sides that build on one another yet tell 2 different stories. Each track features seamless blends with just enough of each classic song to keep the listener entertained." Spotted @ the Dope House (click the link to see the tracklist). Beautiful cover art by Joshua Wallace.


ERYKAH BADU - "GREATEST VIBES" [MIXTAPE]
Posted by lost.tapes.claaa7@gmail.com at 1:07 AM