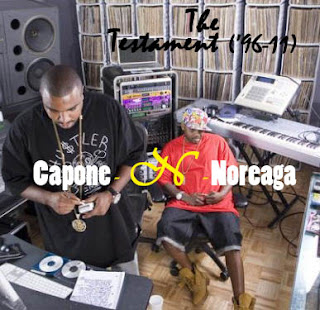 Yesterday Noreaga went on Twitter and publicly announced that his duo with Capone has officially been disbanded. "I'm not making another War Report album or another N.O.R.E. album; I'ma make the 1st S.U.P.E.R. T.H.U.G. album cuz that's what's good for now. C-N-N was a great group/ Time has changed and I must move on... Doesn't it hurt to watch a boxer still box when his heart isn't in it. That's what the group feels like right now", the Super Thug from Lefrak commented. I'm glad they at least went out with "The War Report II" as their final album instead of that horrible "Channel 10" LP; I think the former was a good enough album to honor their legacy with.

To say that I was a big fan of Capone-N-Noreaga would be a bit of an overstatement. I do think they had a unique style and chemistry that unfortunately often were wasted on wack beats that didn't fit them at all coupled with lazy performances. However when they got shit right, they got it RIGHT. Together with Tragedy Khadafi they managed to create one of the most classic hardcore hip-hop albums of the late '90s in "The War Report" and for that I will always respect them and their craft.

After reading the news on HipHopDX this morning I've been compiling a tracklist of some of their, imo, better music from their start in 1996 to last years mixtape crusade. I tried to stay clear from album material but I did include "Grand Royal" since I can't imagine people listening much to "Channel 10" either way; the Marley Marl produced "40 Island" was on "N.O.R.E." but to me it always sounded just like a "War Report" joint; "Gunz & Cash", produced by Buckwild, was found on the vinyl version of "The Reunion"; the Sam Sneed remix of "Closer" was available on the European version of "The War Report", though I always thought it to be the superior version and a much better way to end the album. There's a lot more goodies on here and all in all I think it's a great representation of CNN at their best, so TURN IT UP and enjoy!