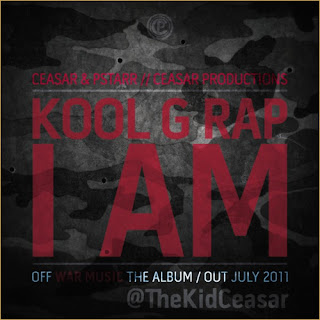 After a long hiatus, G Rap recently released his long awaited solo LP "Riches, Royalty & Respect". While The Kool Genious Of Rap obviously is one of the absolute best rhymeslingers there ever was, the album was kinda 50/50 in quality in my humble opinion. This new single, "I Am" should have been included on that since it bangs pretty hard but it's actually a single from an album called "War Music". It is a producer compilation by two guys who works under the name Ceasar & PStarr and judging from this song this could definitely be worth checking for as soon as I see who the other featured guests are. "War Music" will be out in July 2011.
This is actually the second single from the project; the first one was a Styles P featured joint called "Where The Angels Sleep" that I'm also uploading in this post for those who missed out on it when it first leaked.
KOOL G RAP - "I AM"

STYLES P - "WHERE THE ANGELS SLEEP"
Posted by lost.tapes.claaa7@gmail.com at 12:12 PM