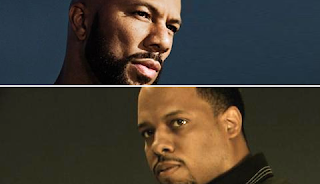 Common Sense rhyming over a No I.D. banger brings back memories of classics like "Stolen Moments", "Breaker 1/9", "I Used to Love H.E.R.", "Resurrection" and so many other gems. The two Chicago natives hasn't worked together since 1997, to my knowledge, so it was very welcome to hear them reunited again on this short but iLL new track called "Summer Madness".
The song is actually not taken from Com's forthcoming tenth LP "The Dreamer, The Believer" but rather from a 7-track offering called "The Pursuit EP" by a collective who calls themeselves Cocaine 80's. The big crew is lead by No I.D. and includes members like Common, Steve Wyreman, Rob Kinelski, Makeba, James Fauntleroy, Kevin Randolph and many more. The Common track is definitely the standout out the bunch however, be sure to check it out below.
COMMON - "SUMMER MADNESS"
Posted by lost.tapes.claaa7@gmail.com at 8:44 AM