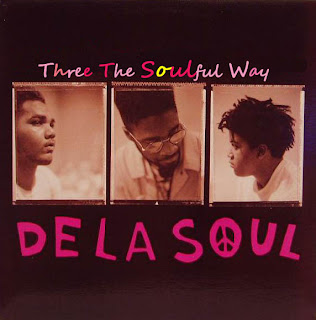 When De La Soul broke through with their classic masterpiece of a debut LP, "Three Feet High & Rising", they completely changed the rules of the game. When you think of the term "keeping it real" you might not immediatly think about the playful, middle class trio and their plug tunin'. The fact is that they were, and still are, the very definition of real and always staying true to who they were; they hadn't grown up in the ghetto, they didn't rap about selling drugs and killing people and they was never afraid of buggin' out to the extent of sounding really corny. But the music of Pos, Dave and Maseo always guaranteed an entertaining listen, with even the skits being repeat worthy.

Another great factor to the groups early success was of course that they had one of the most creative and original producers of all time in their corner; Prince Paul, or the mentor as he was sometimes credited as. Together they took the sample game to another level with beats builded with overdubs on overdubs of records from any imaginable genre. "Three Feet..." became the stepping stone for both De La and Prince Paul but their positive lyrics and happy vibe made many label them as the hippies of hip-hop - an image that didn't sit well with the group. 1991s "De La Soul is Dead" had a much darker edge with more focus on serious subject matters and proved to the world that the group wasn't a one trick pony. The LP was rewarded with 5 mics in The Source at the time of its release.

After 1993s "Buhloone Mindstate", my personal favorite in the De La catalouge, the trio parted ways with Prince Paul and although they consistantly keeps putting out dope music they have never quite reached the same heights that they had done with their three first albums. Another great thing about the early years of The Mentor and His Three Sons was that they always packed their singles with heavy B-sides and remixes that packed equally dope beats and rhymes as the actual album cuts. With this I present to you a collection of no less than 20 songs from the period between 1989 and 1994, carefully sequenced and arranged for the perfect De La experience. The majority of the tracks are of course produced by Prince Paul and his three sons.

DE LA SOUL - "THREE THE SOULFUL WAY"
Posted by lost.tapes.claaa7@gmail.com at 2:25 AM