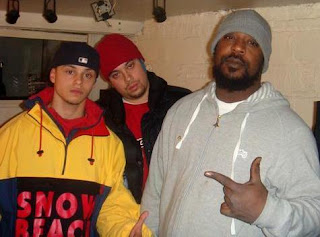 Timeless Truth is a relatively new artist on the hip-hop scene but he sure as hell knows how to get some ill cameos on his records it seems. This new single is called "True Git" and features a hot verse from one of the best of today; Sean Price (of Boot Camp Clik and Random Axe.... you know I had to). As if that wasn't enough, the production is handled by the once-Flip Mode Squad/The U.N. member Roc Maricano, easily one of the best rapping producers these days. If his incredible "Marcberg" didn't convince you, maybe this will. There's also a video in the making for this, stay tuned.
Timeless The Truth has completed his debut album which is currently going under the title of "Rock 'It Science". That means the album should be out sooner than later as long as they find a label with a proper way to distribute the LP. If the guest spots and production is this dope you can count on me to follow the evolution of this project @ The Lost Tapes.

Email ThisBlogThis!Share to TwitterShare to FacebookShare to Pinterest
Labels: BCC