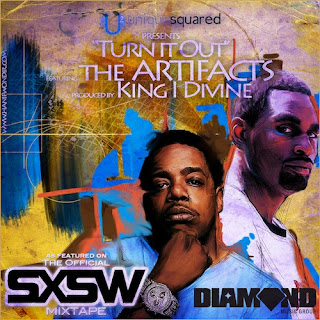 You know I had to post this one, The Artifacts was one of the illest undergroud/backpacker rappers of '94-97 (backpackers as in graffiti writers not emo-rappers) with classic tracks like "The Wrong Side Of The Tracks", "Return Of The Wrong Sidde", "New Jerusalem", "The Ultimate (Showbiz Remix)", "Collabroation Of Mics", "C'Mon With The Get Now" plus its remixes, "Comin' Thru Ya Fucking Block" and much more. If you haven't peeped their two previous albums, don't wait longer because they are both quality mid-'90s hip-hop.
They haven't released an album since 1997s "That's Them" and now 15 years later El Da Sensei, Tame One and DJ Kaos are finally back in business. Their latest efforting was released today and is called "Turn It Out" and is produced by King I Divine. So what y'all think, is this the Artifacst we want to hear?

ARTIFACTS - "TURN IT OUT"
Posted by lost.tapes.claaa7@gmail.com at 1:52 PM

Email ThisBlogThis!Share to TwitterShare to FacebookShare to Pinterest
Labels: Artifacts