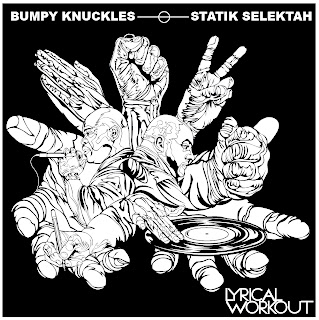 The collaboration with MC Freddie Foxxx and producer Statik Selektah is out today and called "Lyrical Workout". The title track and first single was leaked a while ago and features Bumpy and NORE burying the hatchet; who is actually the only cameo on the entire LP. That's actually a good thing in my opinion since Foxxx is more than capable of holding down his own on this raw boom bap production supplied by Statik.
The only problem I have with "Lyrical Workout" is that I can't find it anywhere for purchase, not Amazon, UGHH, Fat Beats, Megastore, CDON, etc. It's a real shame if this album ends up as a digital release because it truly bangs and its faith is to be a simple internet release I'm dissapointed to say the least; I never in my life bought an mp3 file and I'm sure as hell ain't starting now. If it drops on wax or CD I'ma be the first to buy it, trust. The same goes for the recent KRS-One album, "Royalty Check", that Foxxx entirely produced.
I will most likely write a full review of this soon and I also want to take this post to promise a dope Bumpy Knuckles compilation I've been working on for a while - featuring tracks from various times but especially focusing on all the incredible guest features leading up to his "Industry Shakedown". It was tuff picking out just one ill joint from the LP to compliment this post with, it's just that good, but here's a little something for y'all to enjoy! Also if anyone knows where I can pick this up in physical form let me know in the comments section or via my GMail account.
BUMPY KNUCKLES - "WHO DID THE BEAT?"
Posted by lost.tapes.claaa7@gmail.com at 1:36 AM