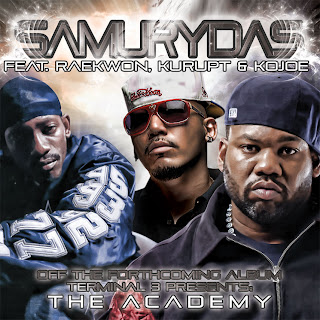 Just got this quite interesting mail via MAC Media talking about an all-exclusives compilation called "The Academy". Normally I am very sketchy about projects like this, they usuaully have a few dope songs and a shitload of mediocre ones, but once in a while you'll be taken by suprise. The project is executive produced by West Coast lyricist Kurupt and interested peeps can look forward to tracks and collaborations from crazy artists like Redman, Royce Da 5'9", Sean Price, Styles P, Jadakiss, Pete Rock, Raekwon,  La The Darkman, Chino XL, Billy Danze, Keith Murray, Planet Asia and Ras Kass to name some of the cast. Production will be handled by the same guys who's responisble for this first single supplied below.
This first single features one of my favorite emcees right now who just never seems to burn out; Raekwon The Chef. Here he trades bars with the exec. himself, Kurupt and a new (?) artist named Kojoe over a soulful banger produced by Marlon Price and JP Beats of Terminal III. "The Academy" features 55 emcees from legends to underground artists, from "the new to the old" if you will; the album will be available through Terminal 3/Bonzi Records.
KURUPT/RAEKWON/KOJOE - "SAMARYDA"
Posted by lost.tapes.claaa7@gmail.com at 2:20 PM