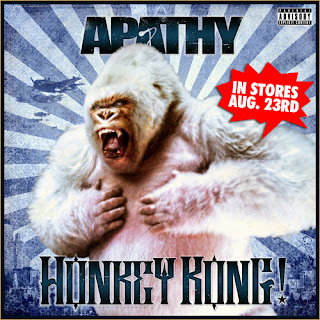 Apathy's new album "Honkey Kong" (gotta love that title) will be delivered to stores on August 23 and judging from this Evidence produced single, it sounds promising. To be fair, I'm not the biggest Apathy fan out there but alot of the guest verses I've heard from him recently has been off the hook an he most definitely has plenty of skills on the verbals.

So does of course Dilated People's own Evidence's production work who really compliment Apath's rhyme twisting on "Check to Check" as it's called, Other producers slated to appear on the album is DJ Premier, DJ Muggs, Da Beatminerz, Apathy and Statik Selektah and guests include Xzibit, General Steele, Action Bronson, Mad Lion (!!), Ill Bill, Vinnie Paz, Ecoteric and Slaine. Sounds like one to check for.
APATHY - "CHECK TO CHECK"
Posted by lost.tapes.claaa7@gmail.com at 1:35 PM