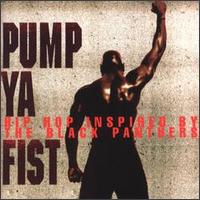 "Pump Ya Fist" was a ill compilation featuring 12 exclusive hip-hop tracks celebrating black pride, inspired by The Black Panther movement. Among the artists we found people like Chuck D, KRS-One, Rakim, Grand Puba, Jeru The Damaja, Fugees and KAM to name a few. If you haven't heard that LP I would recommend trying to get your hands on it, because it's a seriously ill collection that deals with an important message.

What might be even more interesting however is the extremely limited EP, "Selections From Pump Ya Fist", that was released on Avatar the same year. As on the actual album the EP did feature the original versions of the Easy Mo Bee produced Rakim track "Shades Of Black" and the DJ Premier laced Jeru joint "The Frustrated Nigga" (which of course also appeared on the brilliant "Wrath Of The Math" a year later). What makes this limited vinyl release really stand out is that it includes several remixes not available anywhere else, and severely slamming ones for that matter.
The KRS-One track on the "Pump Ya Fist" album is "Ah Yeah", the same version that appeared on his self-titled album in 1995; but on this EP we are treated to three different mixes that has sadly never surfaced anywhere else. Two of them are produced by the great Diamond D, who also had done three joints for the aforementioned KRS album from the same year which makes me wonder if these remixes were conducted at the same time. Being that he is one of my top-5 producers of all time these two remixes is vintage Diamond and, in my opinion, blows the original "Ah Yeah" out the water; when I upload the "KRS-One" album to my iPod I often replace the original with the Rhodes Mix. The EP also features an alternative piano-laced mix by KRS himself that's also well worth a listen.
The Rakim track has an exclusive remix you won't find anywhere else by producer Chase Clark, not a prolific producer by no means (he's done a few songs for Saukrates, Spice 1 and KRS-One) but it's a sick rendition of the original nontheless. Enjoy this EP, it works greatly playing front to back if you leave out the instrumentals. The only problem is that since it's a record sent out to DJs for radio play the songs are censored. As a bonus I also uploaded Da Beatminerz's remix of "Shades Of Black" which was only released on white label 12", straight up incredible mix. 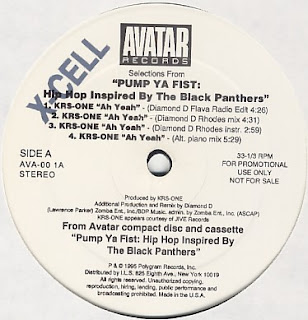 "SELECTIONS FROM 'PUMP YA FIST' EP"

RAKIM - "SHADES OF BLACK" [Da Beatminerz Remix]
Posted by lost.tapes.claaa7@gmail.com at 2:15 AM