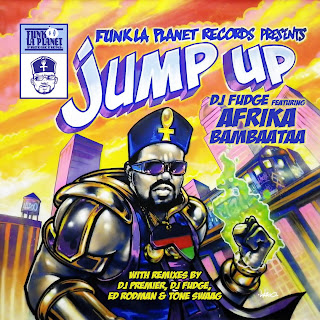 DJ Fudge has hooked up with one of the godfathers of hip-hop, Zulu Nation's own Afrika Bambaataa to release the single "Jump Up". The single is being released on the Funk La Planet label and features remixes by DJ Premier, DJ Fudge, Ed Rodman and Tone Swag. I've been looking around for some further info and somewhere to order/(pre-order?) this but nothing yet. If you know anything hit up the comments section. At least we can hear the Grand Imperial DJ Premier's take on the song thanks to the good guys @ the DJ Premier Blog, props!
AFRIKA BAMBAATAA - "JUMP UP" [DJ PREMIER RMX]
Posted by lost.tapes.claaa7@gmail.com at 10:30 PM