The Staten Island crew known as Ruthless Bastards first appeared on the scene in the late '90s with a bunch of very promising tracks. The five man crew (Truck, Apocallips, Blizzard, Sha Gotti and Iron Mic a.k.a. Infra-Red) first made heads take notice with their classic cut, "Bastards", which appeared on the Wu-Tang Killa Beez compilation "The Swarm" in early '98. Between '97 and '99 they also dropped two incredible 12" singles on Flowmaster Recordings though they formally were signed to Wu-Tang Records. Since then they've dropped a few obscure mixtapes but nothing that has reached the level of their early material. Good news is that they haven't gone anywhere and the whole group (minus Apocallips who's currently doing a bid) have hooked up with DJ Whoo Kid to prepare a brand new mixtape entitled "Whruthless is Back". The title track to that tape was uploaded to YouTube yesterday and can be seen above and represents that real grimey Staten Island rap. Stay tuned for more info on that tape if you like what you hear above.
These news also reminded me of the impeccable 12" single the group dropped in early 2000 featuring the joints "The Authentic" (which features a killer verse by Inspectah Deck) and "Misery, Pain & Hunger". As you can see on the single cover it says that this was released as the first teaser single from a compilation called "Out Ta Bomb Vol. 1 (The Ultimate B-Boy Experience)" which was supposed to be released later that year; something that never came to fruition. Both sides of this 12" only release were produced by Rell Love and Mike McDonald of Tha Blaquesmiths. Both tracks features Iron Mic and Sha Gotti and "Misery, Pain & Hunger" also adds a verse by Blizzard. This release definitely has some Wu-Tang flavor to it and if you were a fan of "Bastards" but missed out on this, you're gonna love this for sure! TURN IT UP!! 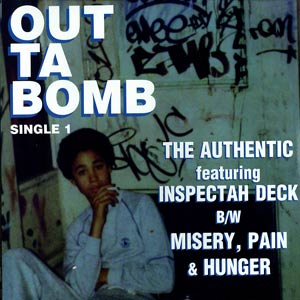 RUTHLESS BASTARDS - "THE AUTHENTIC" VLS
Posted by lost.tapes.claaa7@gmail.com at 2:25 AM