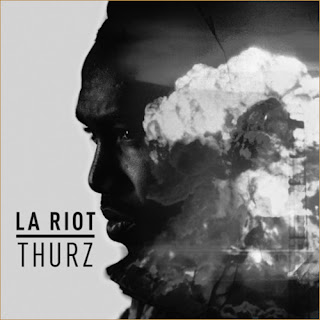 Dope West Coast emcee Thurz released his solo debut, "LA Riot", to iTunes back in late August. For a limited time he has decided to give away free downloads of the project via DJ Booth so hurry up and grab it while you still got the chance. There's a good amount of ill political lyrics on important and current issues that Thurz speaks on over chaotic, heavy production from the likes of DJ Khalil, Ro BLVD, Aaron Harris and THX. I've been wanting to hear this LP since I first posted the Black Thought featuring title track and so far it doesn't dissapoint.
01. "Molotov Coctail"
02. "Rodney King"
03. "Fuck The Police"
04. "Colors" (Ft. Strong Arm Steady)
05. "Hell's Angels" (Ft. BJ The Chicago Kid)
06. "Two Clips" (Ft. Kobe)
07. "Riot" (Ft. Black Thought)
08. "The Killers" (Ft. Jazzy)
09. "Niggas"
10. "Big Ball"
11. "Prayer"
12. "Manifest Outro"
13. "Los Angeles"
14. "Dope"

Email ThisBlogThis!Share to TwitterShare to FacebookShare to Pinterest
Labels: Album