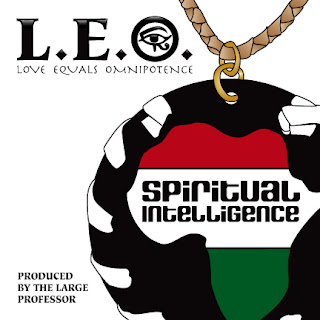 Emcee L.E.O. (an acronym for Love Equals Omnipotence) is by today standards, still a relative new rapper to emerge from the hip-hop scene. He has been rapping for a minute now and dropping some various internet only mixtapes with his crew  who just like hymself are hailing from Flushing, Queens. And as you might know this is also the place that Extra-P reps so I think it's safe to say that common friends or something of that nature is what made their collaboration happen. It's very rare for Large Professor to produce an entire album, and a free promotional digital LP is to my knowledge previously unheard of. But that's exacty what he's done; crafting eleven exclusive instrumentals for L.EO. to spit over for his  debut, "Spiritual Intelligence".

It's quite a light-hearted effort, L.E.O. rhymes with passion but doesn't always seem to take himself too seriously and while Large Professor don't bring out his G.O.A.T. beats´for the project, they damn sure ain't no throwaways either. Plus they fits the emcee they are designed for perfectly. You can definitely hear Extra-P's trademarks all over this, and if that wasn't enough, all cuts and mixing was handled by the one and only J-Zone. I unerstand alot of people have heard this before but for those of you who don't, I figured it was perfect The Lost Tapes material (especially considering Large Pro's one of the greatest beatmakers ever in my humble opinion). Also all the previous links has been uploaded to zShare which can be a real bitch for alot of internet users these days so this time I uploaded it to MediaFire instead. So g'ahead with ya bad self and hit download button. Oh, and for more info on L.E.O., check out his MySpace page.

All lyrics written and performed by L.E.O. except where indicated.
All beats by The Large Professor; All scratches and mixes by J-Zone, except cuts on track #6
Posted by lost.tapes.claaa7@gmail.com at 3:40 PM