Bronze Nazareth - Sound Of The 'D' vs. Shaolin Soul The idea came from my man Jaz over @ Cold Rock Da Spot who started a discussion about who's the best Detroit producer right now in this article. The D has been one of my favorite sources of great hip-hop music outside of NYC for a number of years now and since his poll was between Black Milk and Apollo Brown, I asked him how he felt about Bronze Nazareth, who to me is more similiar in style to Apollo than Black Milk. He suggested I'd make a post on my blog about the greatest beatsmith in the Detroit/Michigan area. Easier said than done as The Lost Tapes often focues on compilations of non album material from our artists of choice (hence the name). So I took Jaz idea and decided to make four compilations over the course of a month, each showcasing some of my favorite producers from Detroit. A short wile back I treated y'all to Apollo Brown - "The Arrival"  and now, next in line, is Justin Cross; better known as Bronze Nazareth. I know he's not exactly from Detroit but he's at least from Michigan so I'll include him either way, you can save the comments. The main reason I want to include him is because his style got elements of what Dilla and Black Milk were doing but with a large dose of Wu style to it.
Cross was born in Grand Rapids, Michigan; the second largest city in MI, next to Detroit, and it was here that he started to hone his skill as both a producer and emcee. In the late '90s he came in contact with an impressed Cilvaringz who rather immediatly signed him to his production team Ringz & Partnerz. Eventually his music catched the ears of Wu-Tang mastermind The RZA himself who around '02 asked him to become part of The Wu Elementz; Wu's own in-house production team, something only about 5-7 producers in the world can say. Since Bronze's signing to the company, no further additional members have been added to the team. This would lead to Bronze producing two of the stand-out cuts on RZA's third solo album, "Birth Of A Prince", in "A Day to God is a 1,000 Years" and "The Birth". Both songs were hailed by fans and critics alike as absolutely outstanding material and people were beginning to count the young Michigan native as a force to be reckoned with.
Since then Bronze has continued to make a name for himself as one of the true carriers of the vintage Wu sound. Since RZA mostly has fallen back of doing that legendary sound he created, he has more or less passed the baton to guys like 4th Disciple, Mathematics, True Master and later Cilvaringz and Bronze Nazareth. They all continued working on the formula The Abbot laid down the blueprint for, at the same time as they each gave their own personal touch to that Shaolin Soul. The style of Nazareth's productions strives to be timeless, with an epic feel created around soul and funk records (often incorporating both vocals and instruments from those songs he samples). The blueprint for good Wu-Tang music shines bright in his music but the rich music history of Michigan's motortown is equally evident. The Motown catalouge finds new life in many of the slamming productions of Cross and you'll hear alot of horns, high-pitched vocal samples, strings, cuts, booming basslines and heavy drum kicks in the music below. Bronze goes from hardcore ("Life I Live") to heartfelt ("The Orbituary") with ease but there is always a touch of soul in his music. Aight, here is number two in my Detroit (or at least Michigan) producer compilations series. Turn that shit up mate and don't forget that Bronze is dropping his second solo album, "School For The Blindman" on September 13!! 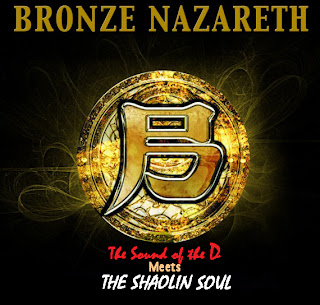 BRONZE NAZARETH - "THE SOUND OF THE D MEETS THE SHAOLIN SOUL"
Posted by lost.tapes.claaa7@gmail.com at 7:55 AM