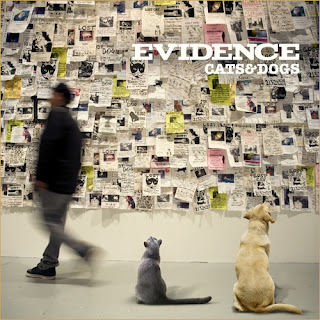 Presented by DJ Booth, the Dilated Peoples front-man takes us into the process of creating his new album with a track-by-track breakdown. Essential reading for fans of the LP so don't sleep on either the music or the link below. I first listened through Ev's "Cats & Dogs" yesterday and went over it again this morning and I have to say that I'm extremely impressed by it. I can't think of another album released this year that I like more right now so I bet it will be a strong contender for that position at the end of December. Although he's perfectly capable of holding down both production and microphone duties on his own he's here backed up by an all-star team including MCs Prodigy, Roc Marciano, Lil' Fame, Raekwon, Ras Kass, Krondon and producers Alchemist, DJ Premier, Sid Roams and a couple of names that's new to me (TwizTheBeatPro and Charlie Brown) but who came through in a major way. DJ Babu only appears on one of the iTunes bonues which also features Fashawn, called "Same Folks". I'm definitely spending money on the vinyl set for this, and I hope all y'all who are feeling it will support too.
EVIDENCE BREAKS DOWN "CATS & DOGS" @ DJBOOTH.COM
Posted by lost.tapes.claaa7@gmail.com at 4:04 AM