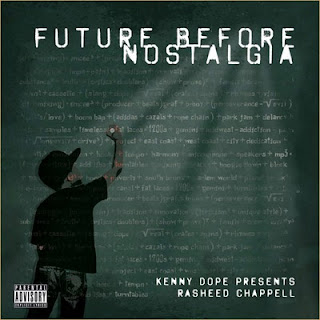 Not that often, but every once in a while, a new debuting hip-hop artist appears on the scene that comes through and really grabs me with superior lyrics and delivery. Such is the case with Rasheed Chappell, a young emcee hailing from New Jersey, who pretty much packs the entire package. He have charisma, honest and thought-provoking lyrics, a sick flow, an ill, kinda nasal voice and the proper production to back him up plus a bright love for the hip-hop game which shines through in the music. From what I understand, Chappell has been around for a couple of years, dropping a vinyl single and a few mixtapes, but personally I first came in contact with him through his super phat official debut album - "Future Before Nostalgia". In classic hip-hop fashion the album features 16 songs of raw emceeing over beats supplied by only one producer, who happens to be legendary DJ Kenny Dope. With no guest emcees whatsoever, save for some seriously ill turntable work by DJ Scratch and DJ Mell Starr, it's all about Rasheed Chappell. Him and Kenny Dope certainly shows chemistry as a duo, seemingly bouncing ideas of eachother, bringing out the best in eachother. The canvas the producer creates includes enough different styles to avoid a tiresome listen while still making the full-length LP sound very cohessive.
Chappell is the first artist signed to Kenny Dope's new label, Kay Dee Records, and uses this golden oppurtinity to record a collaboration that shares many similarities with many classic debut albums from the early-to-mid-'90s. The complete lack of guest artists besides turntablist is one thing, letting one producer handling all the duties is another as well as the fact that "Future Before Nostalgia" isn't based on the typical braggadocious or pointless rap most debuting artists today make a living off. There's a few joints on here where Rasheed speaks on his impeccable skill set ("What I'm Here For") but most of the album deals with topics regarding the artists real life, an honest look at a young mans pains, struggles and glory ("Invocation", "Thankful") mixed in with some brilliant political songs (like "Portrait of the Ghetto" and my favorite track "Building 8" which you can hear/watch above). In this matter the album title stands in contrast to the contents of the disc; the overall vibe is reminiscent of past, better days in the rap game but as things often goes in circles, maybe he's hinting that important music like this will soon be the norm again. But probably, I'm just reading way too much into that. The fact remains though, Rasheed Chappell is the best debut artist of the year in my humble opinion and we can only hope he blows up like he deserves, though this is as far removed from the bullshit spunned on the musical armageddon that passes as commercial radio today.
As for the production, the four times Grammy nominated Kenny Dope (who most recently worked with Chef Raekwon), really does an amazing job at lacing Chappell with beats suited for his personality and musical style. Filled with hardcore drum breaks, dusty samples from old records with vocals and instruments parts of pianos (both electric and accoustic), deep basslines and soforth, Dope creates an outstanding album that's right in the tradition of "authentic" hip-hop. Let me put it like this, if you're a fan of true school rap and likes the content of this blog, and gonna pick up one debut album released this year, this is the one for you! Sick production, refreshing lyrics and fantastic turntable work, it's is sure as hell a very welcome change from Odd Future, Whiz Kalifa, Drake and all that other micro-wave music being force-fed to the public as "good music" these days."Future Before Nostalgia" will hopefully see a vinyl release soon but til' then you can pre-order the CD which hit stores on this Tuesday @ UGHH or straight from Kay Dee Records. Check out the videos in the post plus I also uploaded one of my favorite songs off the LP for y'all to bang while waiting on the album to drop. Don't sleep on this and support real hip-hop!

RASHEED CHAPPELL - "INVOCATION"
Posted by lost.tapes.claaa7@gmail.com at 1:52 AM