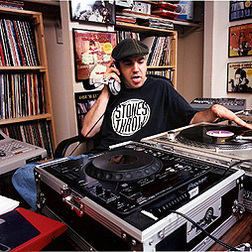 Underrated New York producer Paul Nice, who has laced tracks for Masta Ace, Lord Finesse/Percee P, AG and Biz Markie to name a few, is going hard with his newly started independent record label Slice-Of-Spice. The small independent label specializes in limited pressings of rare tracks and exclusives, often on 7" vinyl and Paul Nice has dropped/is about to drop a bunch of 'em. All the vinyl heads better make sure to cop these while you still can, there's alot of effort and thought put into these releases, not only from a strictly musical perspective but the colored vinyl all comes with full, severely dope artwork. I previously reported on the limited 7" release of the Paul Nice produced "BK (We Don't Play)", an unreleased joint from 2001 with a new Nice remix on the B-side (click on the link to check out both songs). Forthcoming projects on the label include rare tracks with Lord Finesse and Biz Markie; stay tuned for mroe info! 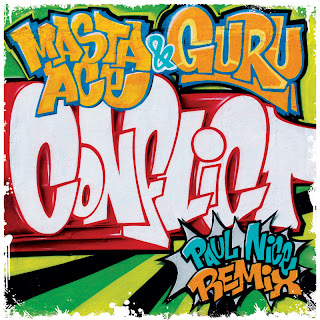 The year was '99 and Paul Nice hooked up with two of the illest emcees in New York, Masta Ace and the late, great GURU, and recorded the track "Conflict" for the Mona Hip Hop label. Nice also created an equally crazy remix of the track that, besides a few dodgy mix CDs, has never seen the light of the day. Slice-Of-Spice has ensured the rights to the masters and is releasing the remix on limited vinyl single with the instrumental on the flipside. The red vinyl is numbered with a gold stamp and comes in the crazy sleeve you see above, created by well known graffiti artist EWOKOne. You can order your copy from your usual suspects like Fat Beats but if you want the real deal on numbered red vinyl check out these various packages via Slice-Of-Spice. Listen/download the joint below:
MASTA ACE & GURU - "CONFLICT" [REMIX] 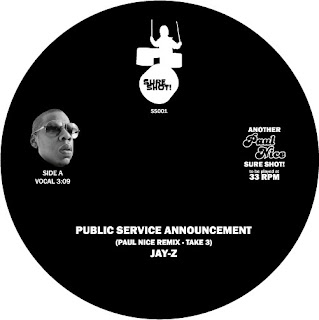 Another Slice-Of-Spice exclusive is Paul Nice's remix of the classic Jay-Z 2004 cut "Public Service Announcement", a jaw-dropping moment off his "The Black Album". As Jiggaman released the accapellas for what would be his final album both newcomers and established beatmakers gave a remix album of it a shot; including Paul Nice. This take on "PSA" was intended for Paul Nice vs. Jay-Z - "The Unofficial Black Album" but failed to appear and is now being released on limited 7" vinyl with the instrumental on side B. Like with the "Conflict" single, you can pick this up @ places like Fat Beats but if you want that special 1000 copies limited marble colored vinyl check out the packages offered by Slice-Of-Spice. Download and listen to the song for yourself below.
JAY-Z - "P.S.A." [PAUL NICE REMIX / TAKE 3]
Posted by lost.tapes.claaa7@gmail.com at 2:46 AM