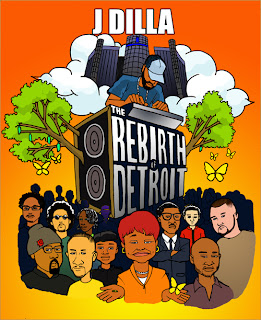 "The Rebirth Of Detroit" is the title of the upcoming new DILLA album which I remember reading about a few months ago. Once again, it's the great producers mother, Ma Dukes, who is behind the project and making sure things go down right which is a great thing since she cares alot about her son's legacy. Up to this point, Dilla's posthumous catalouge has been handled alot more respectfully than those of 2Pac and B.I.G. and I bet this will continue in that tradition. Jay Dee was so god damn creative and just by what leaked to the net over the years there are loads of beat-tapes that all feature quality material. As Pete Rock and Karieem Riggins has both been musical supervisors and co-producers on the last posthumous releases, I wonder who will get the honor this time. ?uestlove maybe... Or they might want to get someone from the D? We'll have to wait and see... But until then, check out the first snippet (about 2 minutes) of "Detroit Madness" featuring Dilla's P.N.C., Phat Kat. I'm feeling this joint alot, definitely sounds like something Yancey cooked up with a Detroit artist in mind. For additional information, check out this clip from April with Ma Dukes speaking on the album:

Email ThisBlogThis!Share to TwitterShare to FacebookShare to Pinterest
Labels: dilla