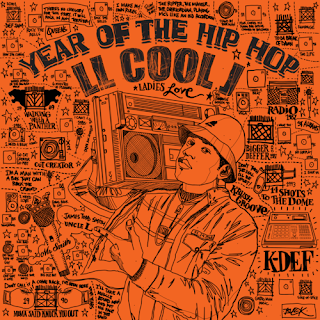 This banging collaboration by the two legends that are LL Cool J and K-Def was first recorded in the "14 Shots to the Dome" sessions in '93/94. Just "14 Shots..." is an LL album that I feel are very overlooked and hated on for all the wrong reasons; there's a few clunkers but the good or great numbers easily outweighs them. I can understand how peeps felt LL was trying to hard to get with the times and sounding like Treach but no matter how you twist and turn at it, his delivery on here is just about perfect and many of the productions are absolutely fantastic (K-Def has previously admitted that he was in fact the uncredited producer behind the classic "Funkadelic Relic"). I might devote an entire blog post to why I think the album has been so misunderstood but right now I just want to spread the word that the release of the almost myrhical, lost K-Def production "Year Of The Hip-Hop" is finally going down.
The song has been meant for release in various incarnations and on different labels for years, including DWG; once with an unreleased Real Live cut on the flip-side. This time it's most definitely final as Slice-Of-Spice will release the lost classic on a limited 10" pressing with an instrumental TV track on the flip. Complete with a fittingly dope sketch by Joe Buck for artwork, 'Def's use of the classic "UFO" break by ESG and LL's fierce delivery is finally getting the proper handling it deserves. A one minute high-quality snippet of this was included (as a hidden bonus) on our official K-Def compilation a few weeks back, but the label has offered up two-minutes CDQ samples of two minutes in length on their SoundCloud page for both versions. Check it out below and stay tuned for more info here @ The Lost Tapes; word is that it will be released in late September so hopefully it don't get pushed back once again again.

"Year Of The Hip-Hop" [TV-Track Instrumental]
Posted by lost.tapes.claaa7@gmail.com at 11:22 AM