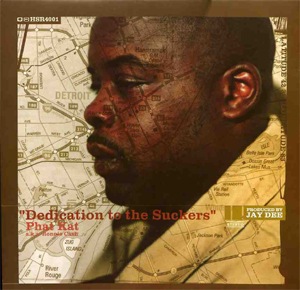 Detroit emcee Ronnie Cash's (A/K/A Phat Kat) and producer Jay Dee's three songs classic "Dedication to the Suckers" single not only stands as some of Dilla's finest productions ever but for me personally one of the absolute illest 12" singles of all time. At the time, Jay Dee had become a household name on the underground hip-hop scene through his many amazing collaborations with A Tribe Called Quest, De La Soul, Busta Rhymes, The Pharcyde, Mad Skillz, Keith Murray and other sick hip-hop acts, mainly based in NYC. If anyone ever doubted, his work with Slum Village was proof that he was still repping The D to the fullest, often saving up his most banging tracks for his hometown... The ultimate testament to this ethic came in late 1999 when he reunited with Phat Kat and laced all production for the entire single.
The chemistry between this duo was absolutely mindblowing to hear on this, although in hindsight the perfect dynamics displayed here wasn't that suprising. After all, before there was a Slum Village there was a duo called 1st Down - consisting of Ronnie Cash and James Yancey. Their track "No Place to Go" was Dilla's first taste of wax when it was released in 1992. 1st Down eventually got signed to Payday/FRRR (at the time the home of artists like Show & AG, Jeru the Damaja, Group Home and even a young Jay-Z) and released the underground classic "A Day With The Homiez"/"Front Street" in '95. They eventually got dropped from the label without getting to come out with a follow-up release, but the above-stated facts shows us the way that the duo's creative minds was already connected, interlocked and ready to peak. 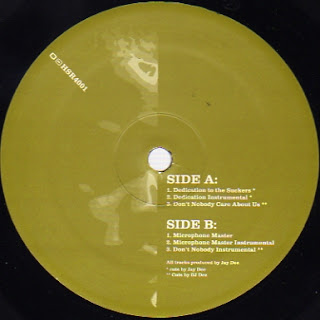 The two clearly brought out the best of eachother, as the often soulful Jay Dee showed off his diversity by creating what, at the time, might have been the hardest beats to make it up from the infamous Dilla basement. Phat Kat doesn't miss the oppurtinity and his confidence shines bright like a star throughout every verse, every line, every banging track. It is not that he's the most lyrical emcee, actually he's far from it, but his gruff, dominating force of a voice and hardcore, thugged out lyrics is the perfect match for this batch of beats.
This is the sound of Detroit right here; the sounds of a city dominating the statistics of crime in the USA for several years but also a city with a vast and extremely rich musical history. Both of these important factors have, of course, played large parts on the city's hip-hop scene and it's sound. Strong influences from both the soulful Motown sound and the original Techno and House scenes that preceeded the rise of hip-hop are clearly traceable on records like "Dedication to the Suckers",  "Don't Care About Us", "Microphone Master", "Let's Grow", "Get Dis Money", "Fall in Love" and countless other Dilla classics - including the entire LPs "Welcome to Detroit" and Frank-N-Dank's "48 HRS".
The original "Dedication..." 12" was released on local DJ and radio personality Michael Buchannan's (better known as "Detroit's ambassador to the world", DJ House Shoes) independent House Shoes Records. According to Phat Kat, the record sold a mind-blowing number of 5,000 copies in its first day of release, a very strong number for an independent underground record like this. In other words, it didn't take very long til' the original pressings were all out-of-print. Any vinyl represses has yet to happen but hopefully it will in a near future as this shit is way too fantastic to be left as a rare out-of-print single. Phat Kat himself, however, issued the single as an EP on compact disc in 2002, featuring two exclusive Dilla produced bonus cuts from the same era. That CD was however even more limited as only 2,000 copies in total were pressed up and sold exclusively through the now defunct RonnieCash.com website. I mention this since this is the source of the rip presented below, despite the sound of an actual vinyl filling up the room beats that of a CD any day, a CD rip always sounds better than a vinyl rip. The sequence of tracks is pretty much the same as on the original but as mentioned before it also has two bonus tracks tacked on at the end - "Big Booties" (also released on "The Undeniable LP") and "World Premier" (the latter unreleased in any other form). While both are solid joints in their own right they are not on the same high level as the three OG tracks. Aight, that's more than enough talk from me... tune in, turn on, TURN IT UP!!!!

PHAT KAT - "DEDICATION TO THE SUCKERS" EP
Posted by lost.tapes.claaa7@gmail.com at 5:19 AM