If you've been following this blog you might know that besides my nr. #1 love of that ol' classic boom bap sound that was responsible for so many classics in the late '80s to mid-'90s, I love experimental instrumental hip-hop music as well as jazz/fusion joints from the late '60s to around '75 but also the occassional later stuff. 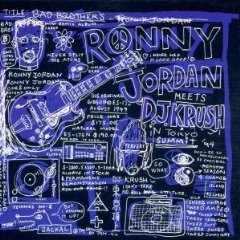 Usually I have the 12" throwback feature on this blog but this is definitely an EP, or maybe even mini album is the more appropiate term. What I got here for you is DJ Krush's and Ronny Jordan's '94 collaboration "Bad Brothers" which clocks in at 35 minutes and includes six new songs and/or remixes. I bet y'all are already well known with DJ Krush, he's made some incredible atmospheric hip-hop tracks for US emcees like GURU, Big Shug, Black Thought/Malik B and Mos Def just to name a few. Still doesn't ring a bell? Then go check out this compilation I made a while back with all his US collabos he's ever released to my knowledge (he's a Japanese producer BTW); "Krushing Competition" which I've been getting alot of positive feedback on and rightfully so.
Ronny Jordan is an amazing "acid jazz" guitarist from the UK who's been hailed in The Source Magazine for his debut album "The Antidote" when that magazine was still very credible. He plays a mean jazz guitar while incorporating a strong hip-hop vibe into the music he released on his two debut albums "The Antidote" and "Quiet Revolution". You might recognize Jordan's guitar licks from GURU's two amazing solo LPs, "Jazzmatazz" and "Jazzmatazz Vol. II: The New Reality" (my personal favorite),

This mini album should satisfy hardcore DJ Krush fans as well as those who like '90s jazz/fusion or "acid jazz" as they sometimes refer to it (a term I personally never reallty liked, but which means that it's jazz/fusion with a strong element of hip-hop production in it). Aight so download this, enjoy the Bad Brothers doing their thing together and drop a sentiment in the comments section to let me know what you think. Here's the tracklist and below that you'll find the link for the EP/mini album whcih was released on Island Records in '94 but is now out of print.. If you're ready for some different, but banging, mellow shit, this one is for you!
01. "The Jackal" [The Illest Mix]
02. "Shit Goes Down" [But I Punked Up Mix]
03. "Love I Never Had it So Good"
04. "So What?!" [Tuff N Smooth Mix]
05. "Season For Change" [Dawn Of The Season Mix] (Ft. GURU)
06. "Bad Brothers" [How Ya Like My Wheel Now?!]