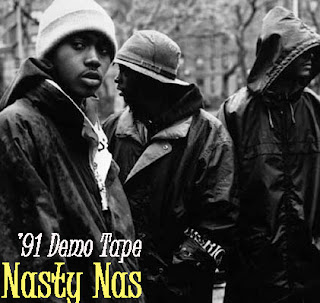 I am of course aware about the so called "Pre-Illmatic" tape that has been floating around the net for several years now. For a long time that had me believe that tape was the actual demo that Nas shopped around and eventually made Serch and Faith Newman sign him to Columbia in '92. Through interviews and articles I found while researching the subject, that's not the case at all. Many of the songs on that internet bootleg are even "It Was Written" outtakes ("Deja Vu" and I believe "Understanding" is post-"Illmatic" too). So what was the original Nasty Nas demo tape that led to his Columbia signing which gave him the chance to record the impeccable "Halftime" for the "Zebrahead" soundtrack and guest on Search's own album in the fall of '92? 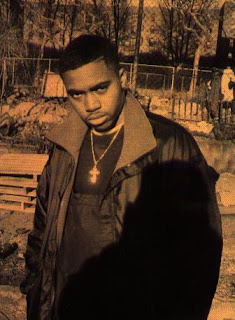 According to MC Serch himself, the actual demo tape that had him climbing walls actually only had two full songs; but two very powerful tracks at that. These joints were "Nas Will Pevail" and "I'm A Villain", two tracks both produced by Large Professor. And although the sound quality isn't top notch you can clearly hear that this is straight up fucking-amazing hip-hop music, and Nasir Jones can't have been much more than 17-18 years old when these recordings were made. They both have that incredible, classic "Illmatic" chemistry between the young word gymnastic and his main producer although it's of course slightly more unpolished (I'm not talking about the sound quality here). In fact many of the rhymes found on the "I'm A Villain"track showcases Nas's tying together alot of bars that he would later revisit in part on "Represent" and "One Time 4 Your Mind", but there is some exclusive lyrics too of course. Some interesting trivia is that the  "I'm A Villain" beat was something Large Pro had created and intended for Eric B. & Rakim, this must have been for the "Don't Sweat The Technique" LP, but the God MC didn't show up that day and NaS got the beat for his demo.

The second song was "Nas Will Prevail", which of course was re-created and re-titled "It Ain't Hard to Tell" when the debut was finally unveiled in 1994. The "...Prevail" track is similiar to the album version in production, with the sax sample and the "Human Nature" part intact, but all three verses are completely different and has, to my knowledge, never been revisited on anything later..Now there is no doubt in my mind that the vast majority of y'all have heard these two tracks before but to hell with it, I wante to make a post on this incredible "demo single" that led up to one of my top 3 albums of al time. I'm also planning to start dropping some demo tapes from legendary artists, so why not start with my favorite of them all? And if you haven't heard these songs in a long time, follow my lead and do so right now. (these are the best quality rips I have ever found of them). Oh and I also added a few banging bonus track that's definitely pre-"Illmatic" and in good quality so that you can listen to this as an EP if you wish. There's only one rule though -  TURN IT UP!!