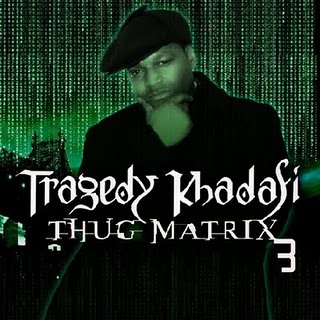 Only a few days ago, I reported that Tragedy Khadafi is brining out a third installment of his "Thug Matrix" series in September. As a big fan of the man's work throughout the years, I'm real hyped to finally hear a new album after his four year hiatus. Well, we already got the first single from the project and if this is what to expect from Trag on this release, there's a reason for being fucking Hyped! This sound almost like some gritty "War Report" ish and verses like these are exactly what I want to hear from him. The song is called "Ill-lumnious Flow" and is produced by Now & Laterz who has produced several joints for the emcee on previous releases.
TRAGEDY KHADAFI - "ILL-LUMNIOUS FLOW"
Posted by lost.tapes.claaa7@gmail.com at 4:01 AM

Email ThisBlogThis!Share to TwitterShare to FacebookShare to Pinterest
Labels: Tragedy