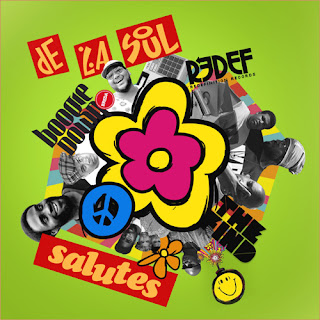 Even after being around since 1988, the trio known to the world as De La Soul is always relevant. Since they're about to play a set on the upcoming Boogie Down Breda Festival in Holland very soon, the festival has joined forces with The Find Magazine and Redefinition Records to release a free tribute EP for the group. The four track project, which is called "Salutes", features remixes of De La classics by producers K-Def, Astronote, K Murdock and and DJ Stitches. Shouts to Redefinition and Justice Equality Supreme for premiering this; you can download the entire EP @ 2 Dope Boyz free of charge, the link below is also borrowed from there. Beware that the 'Def take on here is an instrumental remix though, the way he reconstructs Jay Dee's original beats is a bit similiar to how he took on "For Pete's Sake" on his new 7" single. It's smoking though so g'ahed and pick it up.
K-DEF - "STAKES IS HIGH" [KUSH MIX]
Posted by lost.tapes.claaa7@gmail.com at 12:48 PM