Three interesting singles that just dropped that I felt was worth a mention but I might as well merge them into one post. First out is the lyrical genius that goes by Skyzoo, one of my favorite artists of the younger generation. On this track, "Black Hero Music / Superman" he's spitting his usual scorching heat over that hidden track on Black Milk's 2006 album "Popular Demand" and he's surely makes it justice. I would love to see a collaboration album between these two, between this and Milk's contributions on "The Salvation" and the mixtapes that preceeded it, they have yet to dissapoint together. This is the third drop of something Skyzoo has started called "The Penny Freestyle Series", a series of freestyles dedicated to basketball player Anfernee "Penny" Hardaway. I swear this guy's a machine, he keeps on pumping out quality material like there's no tomorrow.
SKYZOO - "BLACK HERO MUSIC / SUPERMAN" 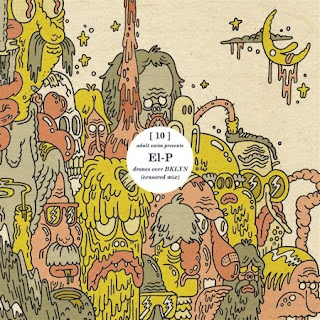 The second single I want to present to y'all today is a little more unexpected; a new El-Producto single released for free via Adult Swim's Website. Adult Swim seems to have a thing for hip-hop, considering they teamed up with MF DOOM and Danger Mouse to release an entire retail album and an internet single a while back and now this track which is the last of some project they had where they've been releasing 10 exclusive singles on their website. The El-P single is called "drones over BKLYN". All rhymes and beats courtesy by the old Company Flow/Def Jux frontman and like most this cat does, you'll either love it or hate it. Personally I think it's a banger, it's a heavy ass beat but not as far out there as much of his work tends to go and the rhyming is on point.
EL-P - "DRONES OVER BKLYN"

Last but not least is the second leak from Terminal 3's "The Academy" album, following the Kurupt/Raekwon/Kojdo single "Samuraydas". Here we gets another heavy posse cut; "Let's Go" features banging verses from Royce Da 5'9", Sean Price, K-Solo and Bronze Nazareth and like the rest of the upcoming LP it's produced by Terminal 3. The guest list for that album is absolutely insane, I bet any hip-hop fan would like to hear this album based on the features. And if it lives up to the expectations, I for one will definitely add this to my record collection. If you missed out on who's featured click on the "Samuraydas" link above for a recap.
TERMINAL 3 - "LET'S GO" (Ft. Royce Da 5'9", Sean Price, K-Solo & Bronze Nazareth)
Posted by lost.tapes.claaa7@gmail.com at 11:30 AM