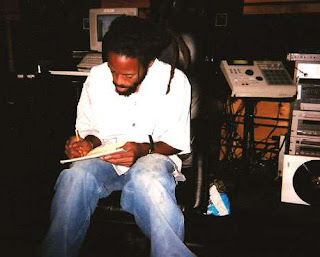 Pete Rock's younger brother, former InI member Grap Luva, is no joke on either the mic or on the production side of things as proven on the shelved classic "Center Of Attention". On that album he produced the impeccable joint "Step Up Time", and also created a few other Pete Rock assumed productions like "Markd4Death", "Press Rewind" and "Half Man, Half Amazin'" from "Soul Survivor". While he's been rather quiet over what could've been his glory days, but these two recent videos proved that he has kept up his SP1200 skills to the fullest. And Damu The Fudgemunk is another fantastic producer of the "younger generation" who has released loads of simply incredible instrumental music, most recently on his new label Redefinition Records. If you haven't heard of him yet (I would first ask you if you'd been sleeping under a rock though), quickly check out "This How It Should Sound Vol. 1 + 2".
With such amazing artists it's not hard to figure out that them combined will produce great things and that is just what label Slice-of-Spice Records will treat fans with in a very near future. The A-side will feature two previously unreleased tracks with Grap on the mic, while the B-side will have six previously unreleased Grap Luva SP1200 instrumental beats, fully remastered. Damu The Fudgemunk is featured on this EP as turntablist, producer or engineer/recorder of the material. This is definitely one to watch out for and if you don't believe me you can listen through high quality snippets of ALL THE TRACKS through SoundCloud below (all the songs on the first page is from the EP besiddes the two at the bottom). Enjoy!