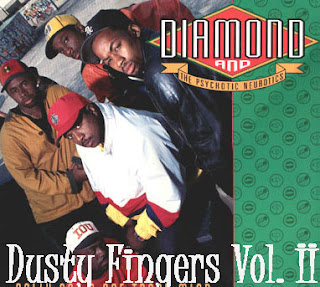 A while back ago I hit y'all up with a compilation of Diamond D productions called "Dusty Fingers Vol. 1" that I got alot of positive feedback on. That comp focused on the producer's work from the 1996 to 2000 era which was the time when everybody wanted a Diamond D track on their album; from Mos Def to Too Short, from Fugees to Pharoahe Monch. It was however the years preceeding that era that really cemented his name as a force to be reckoned with. The way he juxtaposed bits and pieces from both classic and obscure soul, funk and jazz records and found ways to fit so many different samples into the same key or tonality on his debut album "Stunts, Blunts & Hip-Hop" really set him apart from the rest. Together with Pete Rock and Large Professor, he was really one of the absolute main producers to make sampling into an art, using the SP1200 more like an instrument in itself. After his debut blew up in the underground, Diamond was sought out to produce and remix for acts like Apache, House Of Pain, Cypress Hill, OutKast and Brand Nubian to name a few. 19 of these productions makes up the compilation I'm bringing out for you today, which equates to no less than 75 minutes worth of neck breaking hip-hop classics from '92 to '95.