I first came in contact with the skilled trade of Detroit's latest addition to their legacy of incredible producers, Apollo Brown, through his work with The Left last year. I, and many with me, was immediatly captivated by the thick sound he provided for his group as he carried on The Sound of The "D" laid down by musicians like Dilla and Black Milk, while also drawing on inspirations from New York legends DJ Premier and The RZA. From there his work ethic has proved to be extremely serious as he's been dropping solo albums and full-length collaborations with Boog Brown and Hasaan Mackey. And he already got a signature sound that you often immediatly recognize, one with raw boom bap qualities often utilizing heavily chopped up, high-pitched vocal samples and instrumental parts from classic soul records; after all he's from the hometown of Motown, is he not?
Apollo Brown seems to be mostly interested in lacing whole bodies of work, and every album he's laced so far has been well worth of both hearing and copping. Less talked about amongst underground hip-hop followers are his guest productions, which is a shame really since there's plenty of absolutely amazing pieces in that part of his boom-bastic portfolio. Hopefuly fans of the man will find a few gems on the compilation presented below and new heads will be inspired enough to convince themeselves to pick up "Daily Bread", "The Gas Mask" and "The Revival". The 16 track compilation I put together features a mix of established artists and new cats on the block, from both Detroit and elsewhere, getting their chance to rip trademark productions from Apollo Brown. Over the coming month I plan on putting together and releasing, including this one, four compilations each showcasing four pure talents from Detroit - and in what better way to kick things off with than opening up with the newest talent to emerge on the MoTown scene? While listening check out A.B.'s guest blog post for Above Ground Magazine (where the image on top is borrowed from, thanks) and start following him on MySpace. 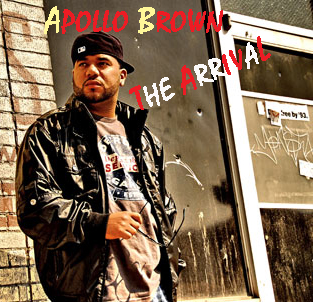 APOLLO BROWN - "THE ARRIVAL"
Posted by lost.tapes.claaa7@gmail.com at 12:25 PM