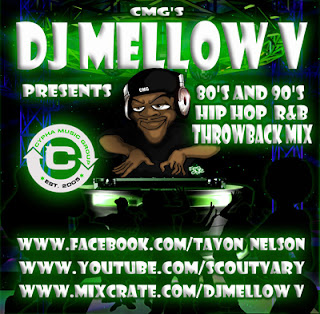 This is some rather cool shit for you to upload to your iPod's and mp3-players for this Saturday and reminisce on all the classics on here, slickly mixed by DJ Mellow V. DJ Mellow V is a fresh young talent on the DJ scene, hailing from Springfield in Massachusetts, at 21 years young he's already been handling the turntables for six years. As you'll noitce by this smooth mix, he specializes in hip-hop and R&B and you'll find tracks from Run DMC, A Tribe Called Quest, Slick Rick, EPMD, Digital Underground, Bobby Brown, Mary J. Blige, New Edition, 2Pac and many, many more. One of the main things that made me take notice and impressed me was how he choosed to mix in Q-Tip's '99 single "Virvant Thing" between late '80s classics by Run DMC and Slick Rick. A quite daring move given the time differences which would have fell flat with the wrong songs but DJ Mellow V pulled it off. He's is currently signed to Cypha Music Group and I wish him all the best in the future, personal and career wise. Originally you had to sign up to MixCrate to download this but after an agreement with the artist, I was given the rights to publish this mix on The Lost Tapes.