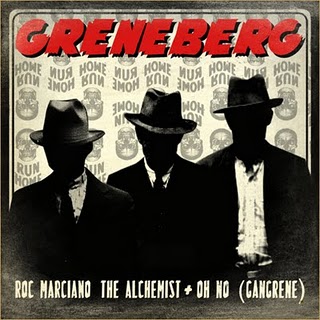 Despite using a name sounding like some type of veggie burger you might find at your favorite fast food restaurant, the three prominemt emcees and producers behind the Greneberg name have all, respectively, been responsible for some of the finest hip-hop music released in the past few years. As you should be aware of by now, “Greneberg” is a collaboration between two heavy and well respected acts that were responsible for two of the illest rap releases of 2010. The rhyming producers of Oh No (Madlib’s younger brother) and Alchemist (Soul Assassins), who makes up the duo Gangrene released the heavily slept-on psychedelic beauty that was “Gutter Watter”; an album that saw the producer/MC’s “litterary” tear shit down over extremely experimental productions and nutcase samples about fieces, stinking water and hard drug abuse, you name it. But hey, what were you expecting from an album titled “Gutter Watter”? 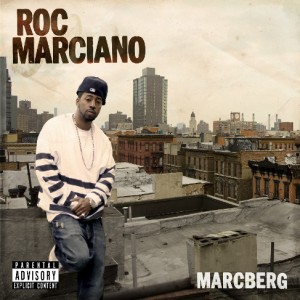 And in the other ring corner, we find another emcee who's also a producer - Mr. Roc Marciano. The Strong Island rhymer have been in the game since 1997 when he first released his debut 12” single as OX Productions, made heavy noise with the Pete Rock/Oddisee/Alchemist/Q-Tip/Large Pro backed The U.N. crew debut in 2001. And we can’t forget how he was also a member of Busta’s Flipmode Squad and was somewhat of an A&R to '99s “Anarchy” album. Besides a extremely limited street album a few years ago called “Strength & Honour”, his real debut solo was released last summer; all produced by Marc himself, taking it back to the ‘80s and early ‘90s with funk samples and drum machines, “Marcberg” was quickly hailed as one of the absolute top releases of the year; myself included.
So while they both made some incredible underground music on their own as recent as last year, the question is whether this 7-track EP will live up to the hype of those previous projects and if the chemistry between them will be there. Actually the dominant force as far as emceeing goes on this 7-track EP is luckily Roc Marciano who appears on no less than 5 of the songs (including the digital bonus track) while the Gangrene guys do what they do best; providing heatrock beats and rhyming by themeselves on only two sole tracks that both clocks in at about two and a half minutes. No offense to them, they are decent rappers  but it’s really the way they produce that has made them legends in this game and is the reason I'm always checking for them.
So it’s a great look to hear Roc Marcy switch it up; From produced his last album in its entirety to let Alc and Oh No handle the beats on 4 of his contributions; the exception being the first song “Mamma Told Me” which is a Marciano production. But as you know Marcy is hardly any average producer and this track sets off the mini album perfectly with a hard, funky beat with some classy horns, synths and vocal samples floating in and out of the composition. As always with Macy there’s plenty of quotables on here, you got the food similies, fashion brand drops and the Strong Island slang in plenty. Vintage Marc right here which makes for a slamming intro!
The second track on side-A of the vinyl, “Hoard 90”, is the first “Greenberg” track if you will; Roc Marciano performs microphone duties while one half of Gangrene, The Alchemist, provides a rock solid beat. This duo has previously worked on a couple of The U.N. tracks that never saw the light of the day but you’ll be able to download a lot of The U.N. exclusives, including those songs, soon enough. “Hoard 90” is a hardcore track that centers around boom bap drums and a tasteful synth sample that’s further poof that Marcy and Alchemist has an excellent chemistry together. The beat is dark and sinister with Roc being Roc and Alc being Alc; Certified winner.
This EP is split up in the way as the A-side is the Roc Marciano side and the B-side is Gangrene’s. But like I mentioned above, Roc is rhyming over Gangrene beats on the majority of his songs and is even featured on a song on the Oh No/Alchemist side so for me this is really a collaborative effort all the way. All three rappers also shares mic time with eachother on the last song on both sides of the vinyl. The closer of the A-Side, “Jet Luggage” (which lacks a production credit but I’m pretty share both Alc and Oh No produced this one together judging from the psychedelic sound and samples of it. Our favorite emcee opens the track and is clearly standing victorious on the song although both Alc and Oh are far from wack. The production is unorthodox as we have come to expect from Gangrene, with weird heavy bass effects acting almost like a sound effect throughout and horns and keys dropping in and out. Drums sews the song together and in the end it’s one hell of a ride. It’s a great closer to side-A, the so called “Roc Marciano Side”, and so far I am really impressed with this EP. Let’s see how the Gangrene side stands up in comparison.
When placing the B-side on the Turntable, the first track we hear is an Alchemist production called “Papercuts”, clocking in at just over two minutes. It’s basically an old-school twist we hear here, but with a large futuristic twist incorporated; it’s minimalistic, lacks a hook and has not much more than Oh No and Alchemist trading bars to the end. Just straight up hip-hop! It’s short but sweet and essentially a great track. Alc is definitely one of the most interesting producers these days, original style, great at studio wizardry and last but not least he works great with Oh No as can be heard all over this EP as well as their (way too overlooked) debut album collaboration. This is followed by a similar short but heavy joint, but this time Oh No is behind the boards. “New Shit” is another track well-deserved of being called a banger. It revolves around more samples of heavily funky parts, with lots of things going on from distorted guitars, broken piano loops and vocal samples which propellers Alchemist to deliver one of his best verses of the album. 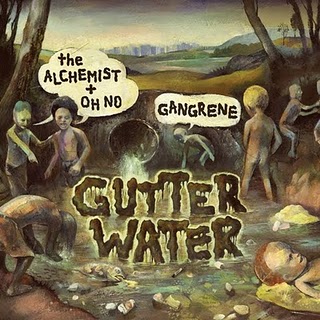 The final joint on this fine extended play, well, at least on the vinyl version, is called “Sewer Gravy”. Another track featuring the microphone master known as Roc Marciano coming through with a murderous verse with that calm flow I loved since I first heard him on “Petesrumentals”. There are a lot of things going on in this production too, probably more so than any other song on the mini album. Crazy sound effects of toilet flushing, polyrhythmic drum patterns and ringing telephones all while the heavy funk is on full display all the way through with blasting horns coupled with a groovy bass line. I love this joint a lot but there is one big problem with it however – this exact beat already appeared on “Gutter Watter”, it was the title track featuring Raekwon. It is a misstep no doubt but at the same time all the verses on here are new and it’s the song on the EP that has that exact sound we have come to associated with the Gangrene album, so for fans of Roc Marciano that bought this because of him and they're feeling this joint they will definitely like the Gangrene LP so maybe it's a marketing plot, who knows.
Ok then, so we’ve heard both sides of the EP now, three tracks each with all emcees appearing on four tracks each and overall I think it’s a quality release for sure. “Greneberg” is a vinyl I definitely will pick up when I’m not in this horrible economic situation anymore. But until then I’ma keep banging this in my iPod and as you might know the digital release has an extra bonus track. That seventh song is called "JAWS" (click to download) and is performed by Roc Marciano and produced by Oh No and is another standout moment of the EP. Don’t you just hate when iTunes or Best Buy or whatever sometimes get some of the absolute dopest songs on the entire release just for them, shouldn’t it be the ones who support via CD or wax that should be entitled to these types of benefits? Oh well, “JAWS” is a perfect closer to this EP and I can’t imagine it without this as the final. Oh No and Roc Marciano displays impeccable chemistry on this track; Oh No’s driving beat really seem to get Marcy into the zone and the quotables just keep on coming. I don’t like to give away too many quotes in my reviews but I’m gonna close this review with one that stuck in my head from “JAWS” that I find hilarious and sublimely speak on the state of the way hip-hop has turned for wose these days: “This ain’t Kid Cudi, this is G shit gully”! Yes indeed, that pretty much sums up the whole project.
4/5
COP "GRENEBERG EP" @ UGHH
Posted by lost.tapes.claaa7@gmail.com at 4:10 AM