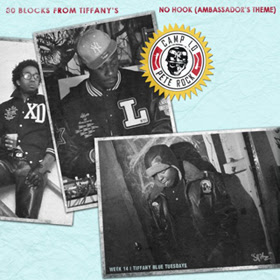 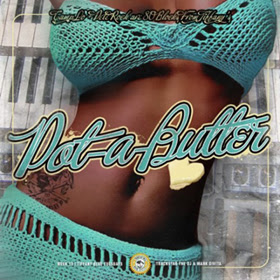 Over here at The Lost Tapes we always give love The Soul Brother #1 and Camp Lo gets their fair share of props too of course. Unless you guys have a extreme short-term memory you'll remember that the trio decided to join forces under the collective name of 80 Blocks From Tiffany's. From there they released their banging back-to-basics debut single/video "Mic Check" which soon was followed by their official mixtape with DJ Trackstar & Mark DiVita, "The Tiffany Blue Mixtape, Vol. 1".
Besides that "Mic Check" joint the tape almost exclusively featured new Camp Lo freestyles over classic Pete Rock beats or Trackstar blends. This was of course nice and it's great to know for certain that the Camp Lo duo is still not a camp to be fucked with. "The Tiffany Blue Mixtape, Vol. 2" seems like it will be more original material, which will serve as a warm-up to their self-titled debut album which has yet to get a release date according to HipHopDX. There it is also revealed that the album will feature 14 songs (just like the recent Pete/Smif-N-Wessun collaboration LP) and that the sound will largely draw on inspiration from the New York gang life of the 1970's and 1980's which is, of course, where the name of the group comes from (see Wikipedia).

Below you'll find two singles from the upcoming mixtape which should be out soon. "Pot-A-Butter" (thanks to Jin10304 for the find) has been confirmed to appear on the album as well, albeit it's not certain if it will be the same version, and my favorite of the two; "No Hook (The Ambassadors Theme". Here Pete flips The Ambassadors' soul classic "Ain't Got The Love" which was of course previously used on the P.R./CL Smooth track of almost the same name back in '94.
80 Blocks From Tiffany's - "No Hook"