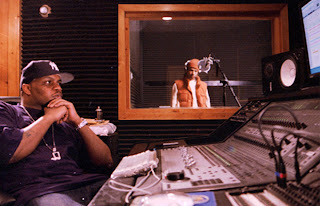 Now what do we have here? New music from my favorite producer/MC duo of all time, next to Gang Starr only, is enough to make any day a little brighter. I'm of course talking about Showbiz & AG, who are probably the most dedicated torch-bearers of the D.I.T.C. squad these days. One of the things that makes them really stand out is their ability to never, ever dissapoint, at least if we're discussing their impeccable catalouge. Even the finalized 2008 release of their EP, "Live Hard", found daily rotation over here for quite some time, once I received it in the mail.
AG is easily one of the most underrated emcee's two ever grab a microphone; always bringing his heart and head 100% into everything he does. Show has always been one of my favorite producers too; always creating that raw boom bap sound we all know, love and in many cases live for. His most recent album, "Godsville" (w/. KRS-One), was a slight dissapointment compared to what we're used in hearing from the man.,That does of course not mean that I don't look forward to a new Show & A album A.S.A.P. The first single from such a full-length project just dropped for free download today together with a minimal news bulletin announcing an LP called "Suspended Animation". The single below is in fact the title track from that album, and considering it's short time it might even be an intro. We'll see.
Much thanks to my man Chris Moss @ Al Lindstrom and Divided Souls Ent. for spreading the word and hooking me up with this D.I. banger.
SHOWBIZ & AG - "SUSPENDED ANIMATION"
Posted by lost.tapes.claaa7@gmail.com at 12:09 AM