The DIX - "The Art Of Picking Up Women" EP 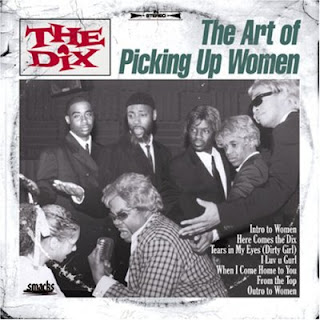 The who? That's right, the motherfucking DIX! These guys dominated the airwaves back in the '60s with their impeccable mashing of funk, soul and gospel as well as elements of styles yet to be created; such as hip-hop and reagge. With a concept like this and the looks you see displayed above it's easy to see how The DIX was getting girls panties wet anywhere they pulled out their massive instruments. At least that's what the hilarious 15 minutes documentary "The Rise & Fall Of The DIX" tells its viewers in a right-on-the-spot classic music documentary style. I believe that the mockumentary was the main reason this group of gentlemen joined forces as The DIX but that doesn't mean that the compact disc EP that came packaged with the DVD isn't both hilarious and well worth hearing.

But who the hell where really behind The DIX? It comes as no suprise that Prince Paul is involved as producer and one of the main members (taking on the alias of Orgynius), even grabbing the microphone on "I Luv U Gurl". I also knew that Mr. Len is one of the guys involved in this (appearing as Burn Hard Gets) but I'm not sure what his exact position was as the production is credited to Paul and there's really no turntablism on here either. I do believe that the documentary and EP might have been Len's creative concept as it was released on his own SMACKS RECORDS in 2005. Besides that I was clueless to who the rest of the crew really was, until I luckily managed to find a used copy of the CD/DVD in a record store a couple of days ago and watched the DVD (I had heard the music previously, being a fan of both Paul's and Len's previous work). Rapper Mr. Dead is performing most of the sung vocals as Peter O'Tool, keyboardist Donald Newkirk takes the stage as one of the Johnson brothers (giving an fantasticly funny performance in the movie) and rapper/producer/engineer Bimos appears as John Handcock. MC Paul Barman is lightly featured in the flick but I doubt he's featured on the actual musical side of things.
As you might be aware of all of the mentioned guys are associates of Prince Paul, that creative genius motherfucker we all love. Paul has always been known for his goofy humor and stretching the creative limits with each experimental project he touches on. "The Art Of Picking Up Women" might however be his weirdest project yet and I think it's the combination of him and DJ/producer Mr. Len that really made this into what it is. The question is how the hell something like this sounds; there's no question you would need major talents to pull off a faked '60s soul/funk album while still managing to please the hip-hop heads - but that's exactly what they do. There's no rapping, there's barely any cuts but hip-hop music has drawn from soul, funk, ragga and gospel since the dawn of its time which means the idea isn't that strange when you really think about it. The samples and actual playing sounds authentic to the late '60s in a way, but with the big beat breaks on top of all of it gives the songs that head-nod quality we're all looking for. "Here Comes the DIX" kicks off the release with a bang and with its glaring horns, heavy drum beat, 'Kirk on the keys and the vocals of Mr. Dead I sincerely believe that this could've been a minor hit had it been given the right attention. Matter of fact is that it was actually released on 7" vinyl single as well. "When I Come Home to You" is another one of my favorites, with Newkirk playing a driving accoustic piano (which could in fact be a sample) with Paul incorporating both a high-pitched vocal sample and some of the guys singing it over. And then again, you have those fat ass drums that, to me, makes the whole thing not just funny, but officially banging. 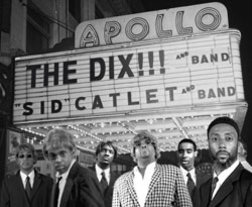 Of course it wouldn't be a Prince Paul project if it wasn't full of crazy skits and in that department "The Art Of Picking Up Women" really don't dissapoint. There's a lot of weird old sampled commercials like an old one for cold milk that will have you shaking your head, wonering where the hell did they find all this strange shit. One of my favorite parts of the EP is actually a skit without a beat, it's just too god damn hilarious; I'm talking about "From The Top".  Here they make a full-blown parody of the classic group presentation intermission from The Wu's "36 Chambers", an album Paul has mentioned in interviews for carrying the best skits of all time. If you're well known with the original skit you're gonna love this one as it's really on point and even that radio DJ doing the interview is right on the spot. All in all, "The Art Of Picking Up Women", is not A-grade material but it is an entertaining 20 minutes to say the least and although it isn't made to be taken serious, Mr. Len and Prince Paul has still created something  that's rewarding to listen to plenty of times, which in itself is a feat. I'm not able to give this an actual fair rating, there's too much to consider and different ways of looking at the music but for fans of Prince Paul and Company Flow founder Mr. Len it is a must hear. Of course the actual mockumentary is a must-see too and the music works best after actually seeing that piece of work. Since this release is by now out-of-print I can assure you that if you see this in a used records store; pick it up, pick it up, pick it up (as KRS-One would say)! Until then, you can always download the project below and hear it for yourself... One thing that will please you about this digital version, is that I cut out the 40 minutes of silence that follows the one minute outro on track #7 which saves a lot of room on your music players depiste it being ripped in 320 kbps. Enjoy!

THE DIX - "THE ART OF PICKING UP WOMEN"
Posted by lost.tapes.claaa7@gmail.com at 5:59 AM