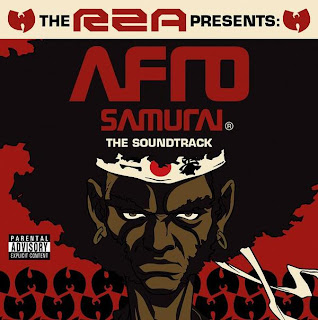 Since things are moving kinda slowly today, I'm bringing out a Wu banger from 2007 that I doubt anyone except the most devoted Wu-Tang followers have heard in full. The song in question is called "Caught Up" and performed by the West Coast Killa Beez, Black Knights, over a sick RZA production. It was recorded around 2006 for the soundtrack to the "Afro Samurai" anime series which RZA scored all music for. All the hip-hop songs on that first soundtrack is nothing short of amazing, anyone who ever doubted that The RZA still can lace classic, Wu sounding beats should take a listen to all those songs again ("Cameo Afro", "Certified Samurai", "Just A Lil Dude", "Who is The Man", "Take Sword Pt. 1 & 2", "Fury in My Eyes/Revenge").
"Caught Up" appeared in the series, during the air-fight between Afro Samurai and whatever that big bear was named now again, but failed to make the actual soundtrack album for some reason. Fans were amped by that snippet in the flick though and for a few years this was highly sought after amongst RZA and Black Knights heads. There was a live performance of it on a MySpace page but it didn't really capture the essence of the track and like so many other RZA productions it looked like fans would never get to hear this song in full. Until one day when... aah fuck it, I don't even remember how this track got leaked in the first place but it's quite possible that Christ Bearer released it (EDIT: I got informed that it was uploaded to Black Knights myspace page and ripped by Luz @ Wu-Corp forums, thankx man). However that may be, it's a dope track that in my opinion should've made the "Afro Samurai" soundtrack in the first place.
As a bonus I also uploaded another sick collaboration between The RZA and Black Knights called "Killer Bee Til' Ya Die" which was released in 2008. Everything points to this being recorded for RZA's "Digi Snacks" album as it appeared as the B-side to a limited promo version of the single to "Drama". The fact that this song is better than pretty much anything on that album, while also sounding more like a Bobby Digital track, makes you wonder what the genius producers are thinking sometimes.
THE RZA PRESENTS BLACK KNIGHTS - "CAUGHT UP"