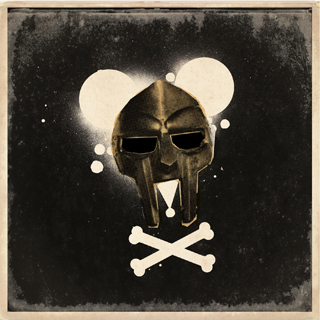 I remember when I was first introduced to the UK producer Brian Burton, better known as Danger Mouse. This was around 2005 when I heard the incredible mash-up album "The Grey Album" which was soon followed by the equally amazing collaboration with Metal Fingerz DOOM, "The Mouse & The Mask". The way Danger Mouse chopped up obscure samples, incorporated humorous vocal clips and musical bits and utilized drums that was as crisp and banging as the best hip-hop producers of the new decade, made me hold him as the brightest shooting star; I saw a connection between him, Dilla and Madlib as some sort of the holy trinity of out-there underground producers. Burton's heavy but playful boom bap was a perfect match for MF DOOM's unorthodox multi syllabels and animated rhyme style. The album was of course made in a very special way as it was not only a collaboration between a amazing producer and an incredible emcee but also a collaboration with the late night cartoon network Adult Swim. This meant we were getting small cameos from a host of the networks animations including Master Shake, Louis Griffin and The Space Ghost. DOOM also rhymed around these characters, creating stories involving them, making the album totally unique and undoubtly an underground phenomena.
While we didn't get another full-length album from the dynamic duo, well at least not yet, the two once again teamed up with Adult Swim in 2006 and released a seven track EP following the theme of "The Mouse & The Mask". After a short intro, the listeners are treated to a impeccable remix of "El Chupa Nibre" that might even be superior to the original; the EP also features a severely sick Danger Mouse remix of "Sofa King" and a very different Madlib remix of "Space Ho's". In fact I've always wondered if the so called Madlib "remix" in fact the original version as DOOM drops the lines "Madlib switch the beat and walk him to the desk/ While Danger holding down the control room" on both versions of the song. The EP also features two completely new songs that both fits the description of "great shit"; "Korn Dogz" and "Perfect Hair II" plus an hilarious three minute interlude featuring a cameo from the Space Ghost. Besides these banging seven tracks that runs for about seven minutes, I added the three tracks that predated the "Mouse & The Mask" album with three Danger Mouse productions that featured DOOM as a guest artist. All in all this is a very interesting listen as it features everything these two ever released together, and especially if you never heard the EP in the first place this will probably make your day.
01. "Skit #1"
02. "El Chupa Nibre" [Remix]
03. "Perfect Hair"
04. "Korn Dogz"
05. "Skit #2"
06. "Sofa King" [Remix]
07. "Space Ho's" [Madlib Remix]
08. "Social Distortion" (Ft. Prince Po) [*]
09. "Somersault" [Remix] (Ft. Zero 7) [*]
10. "November Has Come" (Ft. Damon Albarn) [*]