12" Throwback: Jemini The Gifted One 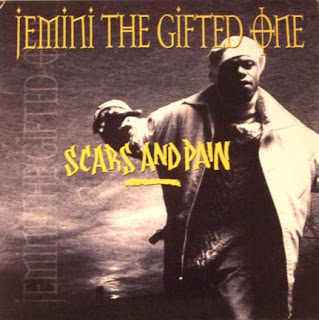 Brooklyn rapper Jemini The Gifted One has, sadly, got to be one of the most wasted talents hip-hop has wittnessed.  In 1995 he had gotten himself a recording deal with Mercury Records, and besides releasing this amazing 7-track EP on wax, the label also released two promo singles containing songs from the EP, certainly with DJ's in mind. A video for the lead track "Funk Soul Sensation" was also made and released. In other words, the label were trying to push Jemini to a larger audience and obviously preparing for a debut album. It isn't suprising, such a talented cat, his gift to grab the audience by his words and his hardcore appeal should definitely be heard. After testing the waters my best guess is that Mercury didn't feel the same and decided to drop him from the roster, leaving only a few 12" releases and a funky video as reminder to the rest of the world that Jemini had ever existed.
Luckily the chapter on The Gifted One doesn't quite end there but it would take about eight years before we would hear from him again. This time he hooked up with DJ Danger Mouse (Gnarls Barkley, DangerDOOM, Gorillaz), an english producer that had yet became super producer extraordinare in peoples minds, to record and release the full-length collaboration "Ghetto Pop Life". If you ever heard Danger Mouse's earlier production, you know the sound, an original approach as well as showing influences from Prince Paul, Dilla and Madlib. Jemini's unique approach to the mic and style hadn't changed much over the years and the album, which featured guests like Cee-Lo, Alkaholiks, Prince Po and The Pharcyde, ultimately proved to be among the absolute best hip-hop albums of 2003. If you havent't heard that one yet, you'd do yourself a huge favor finding it out; and if you're familiar with Danger Mouse's production work and then hear this rare EP i'm about to post I doubt you could resist.
The same year they released an EP featuring some various exclusives as well as remixes for album cuts, but since then Danger Mouse has became huge and is in 2011 working with James Shiner in Broken Bells, while Jemini has once again been left in obscurity. Wether or not we'll ever hear anything new from Jemini the Gifted One remains to see, but however that may be the few releases he has put out will always make me hold him in high regards as an emcee and entertainer. This EP also contains two of my favorite Buckwild productions; "Story of my Life" and especially "Scars & Pain". Track #2 was produced by Minnesota and tracks #4 and #5 by Organized Konfusion. TURN IT UP!!!!
01. "Can't Stop Rockin' (Tribute)"
02. "Brooklyn Kids"
03. "Scars & Pain"
04. "Letcho 'Batyflow"
05. "Funk Soul Sensation"
06. "Story Of My Life"
07. "50 MCs in a Cypher"

JEMINI THE GIFTED ONE - "SCARS & PAIN EP"
Posted by lost.tapes.claaa7@gmail.com at 5:01 PM

Email ThisBlogThis!Share to TwitterShare to FacebookShare to Pinterest
Labels: 12" Throwback, Buckwild, EP, Out of print