Why Saigon didn't live up to his full potential... 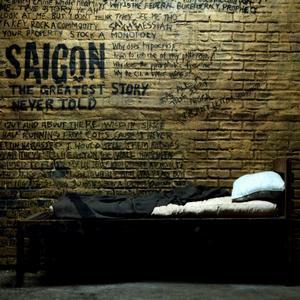 LOVE
In a way I was very dissapointed the first times I heard Saigon's "The Greatest Story Never Told", and made some negative remarks about it on various forums. Some people might think I hate that LP but you couldn't be more wrong. I actually play it alot these days, and even more so just recently which is way more than I did when it had just dropped. One of the main reasons for my dissapointment was that it was too different from what I had expected after years of waiting, which can fuck up a first listen for anyone. But as I started revisiting it, i realized that Saigon's debut actually had mad potential. Sai is easily one of the best "new" rappers doing it right now, no question. Both when it comes to writing full-fledged songs, delivering verses in a breath-taking manner or making the characters in his rhymes come to life he's got it on lock. You can't hate on the fact that he always seems to be 100% confident in himself and his skill without being overly cocky, he shows rather than tell.
Right from the intro you know you're in for a treat as the album starts with Sai being released from prison. He's having a discussion with his man who got several years left and our guy gives him a clock radio, a few books and so. The inmate, his life in prison and his listening to the clock radio Sai gave him is a running theme for the LP and gives it some deepth. As he checks the radio he tunes in to this amazing Just Blaze beat with Fat Man Scoop basically introducing the album while including som ehilarious quotables. The strings and vintage Just drum pattern makes for a real head-nodder and overall it's the perfect intro to the "Greatest Story...". The first actual song on the album is the Q-Tip blessed "The Invitation", another boom bap treat steeped in vocal samples and thunderous keys revealing that Just never lost a step. The Abstract's hook brings the track to the next level when coupled with the amazing lyrics from Sai; it's a powerful moment.

Following this is "Come On Baby", a very good joint for sure although it's been out for a while which is both a good and bad thing. They wasn't able to clear the sample for it so the beat, while sounding remotely the same, is a replica that doesn't quite match the heights the original reached and sounds a little watered down in comparision. Jay-Z's verse from the 2007 remix is kept which is something I could've been without, remember "My first album had no famous guest apperances, the outcome? I'm crowned the best lyricist"? Well that's just nitpicking anyways, it's understandable he wanted such a high-profile name on his debut. Despite it being quite old by now it's still a definite club banger!
Skip a track and you get to "Friends" / "Enemies". NOW THIS right here is some potent storytelling at it's finest and it's brilliantly sequenced to have them follow eachother, this is definitely Part 1 and 2 of the same joint. "Enemies" sees Saigon flexing his lyrical muscle big time; by using metaphors he's descripting the streets he grow up in and how he first saw that as something positive, it taught him to become a man but as time goes on he realizes that the street is your biggest enemy. "Friends" is a little more straight-forward in its storytelling but just as potent. Here he gives his thoughts on fake friends who put on a fasade for you but sooner or later they'll reveal who they truly are. These are two records I easily can relate to and Just Blaze (co-produced with D. Allen for "Enemis") shows why some call him genius by creating productions fitting the mood of the lyrics and utilizing samples that Sai can play off.
The center piece of the album is a true anthem for those who feel lost in this fucked up system. This is one of my favorites of the entire album as Just Blaze and Sai give proof of an amazing chemistry between them. "Strugglin' to Survive, 9-5 ain't making it, turn on the TV all I see is celebrites taking it... and not sharing it", there's so many quotables in here and the scratches Just incorporates close to the end is like a big red cherry on top. "Preacher" is another center piece of the album and once again the chemistry between MC and producer is displayed to the fullest. Sai speaks on an important subject that you rarely hear mentioned anywhere, about the preacher not living how he learn and how the church be taking money from even the poor. It's a well needed boot to organized religion that needs to be said in this day and age. Once again Just Blaze hooks up a vocal sample for Sai to play off over his up-tempo but soulful production that's just marvellous.


"Better Way" and "Oh Yeah (Our Babies)" are two more laid-back tracks near the end of the album, that's just as good as any of the previous records. They find Saigon in a reflective mood, speaking on the ills in the world as well as stressing the importance of the importance of a change, and one soon at that. His closing verse on "Oh Yeah" was so dope that I had to put it in my Quotable of the Week (a section I started where I hype up recent favorite verses that need more shine). Both the afro-mentioned songs are perfect closers and sounds like the ending to a classic album. After these are over we get back into the jail cell where the inmate from the beginning falls back into sleep and a dream-like, filtered version of "Enemies" featuring Bun B is heard. The song is abruptly ended by a prison guard telling the inmate to wake the fuck up, this ain't no resting home, which ties the listening experience back to where we begun.
HATE
"The Greatest Story Never Told" was in the works for about five years, the first single was heard in 2006. Add statements from Sai and the albums producer that they have completed a true masterpiece; the first classic in years and even went as far as comparing it to "Illmatic". Industry rule number #20500 - don't hype up your album more than you knows you can deliver. With such statements, and the long wait for it to arrive, the pressure is on so no one can be mad for reviewers comparing Sai's debut to the classics of the '90s. "Illmatic" was 10 songs long (including a classic intro that helped the album become the classic it did); Saigon on the other hand has 18 tracks on his and the CD or 2xLP is filled to the breaking-point with a running time of almost 80 minutes (again twice the time "Illmatic" and other classics like "Follow the Leader", "Madvillainy", "Liquid Swords", "Criminal Minded" and "The Fix").


If an artist is striving to make his debut a true classic for the sake of art and dope music, radio spins shouldn't be his or her first concern at all. A classic album is timeless and typical radio hits or songs that bear trademarks of the year they was made in often feels passé only a year or two later. One half-commercial single with personality and an imporant message is the trick ("Clap") but Saigon included several radio friendly songs in his Story which diminished the overall impact of the album. Many of those tracks are enjoyable for what they are but for such a monumental album like this one they don't fit in at all. He would've been better off giving them out on mixtapes or using them as B-sides.
Sai's flow is incredible, the lyrics are clear signs of a top MC but as an album "The Greatest Story..." becomes a little messy. He doesn't seem to know if he want to make a smart and street hardcore album or go 50% with the raw Sai (which is also how he built up his hype) with the other 50% being a light-hearted mix of sex and love jams where he sounds completely out of his element, at least compared to the other type of songs on here. Other tracks like "Believe It" or "Bring Me Down II" has great lyrical value, especially the first mentioned but they are both ruined by lame hooks aimed at the radio and teeny boppers (the latter even sounds like a Lil' Wayne auto-tune hook) and will be passé within two years. 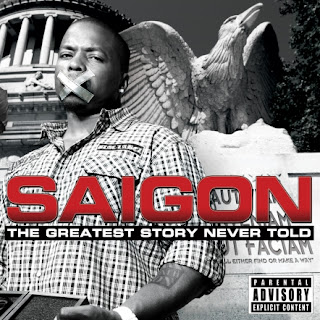 The original cover, pictured at the top of this post was also much better; original, fit the concept perfectly and looked timeless. The retail cover, above, look like anyone elses photoshopped hip-hop cover in 2011 and does not reflect the great parts of the music as well at all. A little thing for sure, but I felt I wanted to comment on it since it bugged me.
.
CONCLUSION

01. "Station Identification" [Into] (Ft. Fatman Scoop)
02. "The Invitation" (Ft. Q-Tip)
03. "Come On Baby" (Ft. Swizz Beats) [OG]
04. "Enemies"
05. "Friends"
06. "The Greatest Story Never Told"
07. "Clap" (Ft. Faith Evans) [No Skit After / CDQ]
08. "Preacher"
09. "Better Way" (Ft. Layzie Bone)
10. "Oh Yeah (Our Babies"
11. "...And The Winner Is" (Ft. Bun B) [*]
As you can see above the 11 songs tracklist I've been bumping for a good while now really made me realize how utterly amazing this album really is (and I tried several versions but to me these 11 tracks are the ultimate way of listening to the album). Had it instead been released like this, following in the footsteps of other classic albums, it would've been a 4.5/5 album - a straight up superior hip-hop album and better than 95% of what has been released this year. And later down the line it might had even been considered a rap classic / masterpiece with a legacy. But while 11 tracks with an intro and a running time of about 43 minutes is incredible on it's own, a 77 minutes long album with lots of filler despite having the same 11 tracks diminishes the project greatly. I love this album, but I love the version I made for it that I posted above. Either way it's still good but I think Sai did a big unservice to himself by trying to make this album almost 80 minutes long..
So in a way it actually IS "The Greatest Story Never Told"; you know those guys who can't tell a good story if their life depended on it since they try to give every single unimportant detail? That's kind of how Sai's album is in a way, the greatest story if you will is there but it's surrounded by meaningless stuff that just get in the way of him being able to truly do that incredible story justice, like it should be heard. I encourage anyone to listen to the tracklist I put together and I'd be very suprised if anyone feels the retail is better but to each their own of course.
Posted by lost.tapes.claaa7@gmail.com at 9:19 AM