The one and only BOMB SQUAD 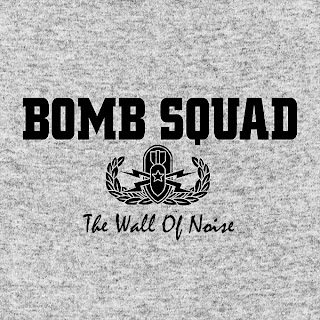 The Bomb Squad was of course the sonic geniuses behind Public Enemey's three first classic and groundbreaking albums, "Yo! Bumrush The Show" (1987), "It Takes A Nation Of Millions To Hold Us Back" (1988) and "Fear Of A Black Planet" (1990). The crews sound was something out of the ordinary, layer on layer on layer of samples to create music full of NOISE; as Chuck D said, if Phil Spector invented the wall of sound then Hank Schocklee's style was the wall of noise - and he definitely had a very valid point.

The Bomb Squad consisted mainly of Hank and Keith Schocklee, Eric "Vietnam" Sadler and Chuck D himself (at least for the P.E. records). Later on producers Gary "G-Wiz" and Kerwin Sleek Young was added to the production team but for this compilation I wanted to focus on their older material, the real Bomb Squad sound with the Shocklee brothers and Eric "Vietnam" Sadler. So the music on here are almost exclusively from 1988 to 1993 and is filled to the limits with 19 tracks, and almost 80 minutes of dope golden era hip-hop. I don't know what the hell happened to The Bomb Squad, between those years I mentioned they were really big and everybody loved their sound but from 1995 and onwards it's like they stopped music, with a very few exceptions such as a small number of remixes.

While they were active they produced a gang of albums in full; the three Public Enemey's album mentioned above, Ice Cube's "Amerikkka's Most Wanted", Young Black Teenagers '91 LP and "Bazerk, Bazerk, Bazerk" by Sonz Of Bazerk & No Self Control. I didn't want to include anything from those albums obviously, but I think this is a good representation of The Bomb Squad's non album tracks, remixes, soundtrack joints and what not. The only thing I wanted on there that I didn't have room for was a track from Slick Rick's debut but you should have heard that anyways. Oh well, TURN IT UP!!!!!!