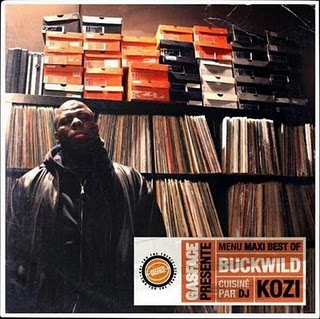 Yesterday the internet magazine Complex posted a great and informative interview with Buckwild detailing the making of 33 of his classic productions. Of course I had to post the link to such a dope piece (just scroll down two posts from here and you'll find it right there). In that post I also promised when I did so, that I would have a compilation of Buckwild music by today. I uploaded this one on my iPod a few days back and it's been getting regular front-to-back spins, I think I came up with a sequenceing of the songs that makes it flow very well and makes the incredible music justice. Of course Buck's production represents some of the best hip-hop you'll ever get to hear in your whole damn life!
What I wanted to focus on this time was this legendary beatsmiths work between 1997 and 2000; the main reason for this being to sort of give fans an unofficial follow up to his self-released 2xCD compilation, "Diggin' In The Crates", which highlighted 39 classics that he laced between '93 and '97 (that LP's a must-have, but unfortunately it is currently out of print). Another reason was that I find that period of time to be a very interesting part of his catalouge; he was still carrying on the elements he fully embraced in the early '90s, diggin' deep in the crates and hooking up raw, but often jazzy or soulful underground productions in a true boom bap fashion. But around the time of this period he was sort of also more and more coming in to his own as a producer in my opinion and he was the main behind several HUGE records at the time. Many of which became singles -, functioning like some sort of extended hand of The Hitmen (for Bad Boy) and the in-house producers of the Roc-A-Fella camp - come to think about it I think Buck might've been under Roc Management around this time..In other words he delivered many chart records and singles for big names and allowed himself to introduce a somewhat commercial sound on certain records (remember this was the late '90s though and the mainstream of then can't even compare to the painfully generic mainsteram hip-hop more polished element in his music but unmistakenly never forgetting his roots and undoubtly always utilizing more-or-less rare samples but often in a new and exciting way. He pretty much changed it up here, but not completely, and this is something that every succesfull artist(with some very few exceptions).
So with this mix I want to show y'all, at least what I think, is a very good representation of Buckwild's sound and evolvement between '97 and 2000 and therefore I included several records you most likely already heard and combined them with work he did for underground cats, remixes or alternative versions (there actually were a couple of rare rare tracks by Shamus amongst others that's real ill but due to the mismatched sound quaity compared to the other songs it was better to use other joints instead, albeit more popular that you most likely heard (like Jigga's "Lucky me", and of course Biggie's "Story toTtell" but don't let that turn you off of the album). Of course his crew DITC naturally appears on a couple of songs, but none of their regular album material.(the original version of "Way Of Life" and Lord Finesse's "Down For The Underground" are both highly potent joints  to say the least and last but not least I added the classic Terror Squad '99 posse cut; "Rudeboy Salute".
I know y'all gonna enjoy this one so I'm not gonna hold it up anymore and go straight through the heavy beats and rhymes. Just one last thing, the cover you see is taken from a mixtape of Buckwild productions released via Gasface Media some years back but I think it fitted well (plus Buck doesn't seem to like being in front of cameras, there's very few pics of him available). Aight then, TURN IT UP!!!
01. Big Punisher - "The Dream Shatterer" [Buck's Original Mix]
02. Lord Finesse - "Down For The Underground"
03. Black Rob - "WHOA!"
04. DJ Clue pres. Lord Tariq & Muggs - "Cops & Robbers"
05. Street Smartz . "Don't Trust Anyone" (Ft, PI & LS)
06. DITC - "Way Of Life" [Buck's Original Version]
07. Lace Da Booms - "Muder Seaason"
08. Afro Jazz Ft. Big Red - "You Can't Stop"
09. Terror Squad Ft. Buju Banton - "Rudeboy Salute"
10. Beanie Sigel - "What A Thug ABout"
11. Royal Flush & Mic Geronimo - "Makin' Moves"
12. Mic Geronimo - "How You Been?"
13. Akinyele - "Sister Sister"
14. Rhymester - "マイクの刺客"
15. Big Punisher - "Nigga Shit"
16. Notorious BIG - "I Got A Story to Tell"
17. Ma$e - "Another Story to Tell"
18. Jay-Z - "Lucky Me" [Ft. Stevie J on guitar and keys]
19. Organized Konfusion - "Invetro"

BUCKWILD - "BUCK BUCKIN 'EM DOWN"
Posted by lost.tapes.claaa7@gmail.com at 5:51 AM