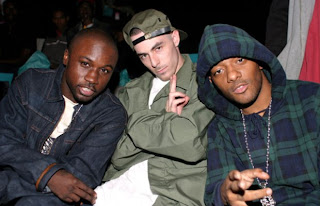 Since the long-awaited release of Capital P he's been keeping on the grind heavily, we've all heard the two recent brilliant Mobb Deep cuts "Love Y'All More" and "Dog Shit". Prodigy's been a free man for about one and a half month by now and he, Hav and Alc seems to basically been locked down in the studio, as the Queensbridge emcee revealed in this informative Complex interview that the trio recorded around 70 songs so far already. He also speaks on his book, why he and NaS didn't get along to well at first and also that "Dog Shit" is only one of several new Mobb Deep/NaS collabos. Definitely a must read, so check it out here!
P will also release a digital EP by the name of "The Elworth Bumpy Johnson" tomorrow, which is also the same day as Curren$y's free 10-track mini album fully produced by The Alchemist drops - which of course also features a new verse by the Mobb Deep rapper. Both releases will be posted @ The Lost Tapes as soon as they are available so be sure to not miss out on that.
But already today we can hear a "new" Mobb Deep joint; at least a previously unreleased song although I'm not sure whether or not it's an older song. It's called "Must Go Hard" and is taken from Streetsweeper DJ Kay Slay's new tape "Strength Of A Gesture" which also features new tracks by Papoose, Sheek Louch. Herb McGruff, Fred the Godson and others.
MOBB DEEP - "MUST GO HARD"
BONUS: Jim Jones Ft. Prodigy, Lloyd Banks & Sen City - "Take A Bow"
Posted by lost.tapes.claaa7@gmail.com at 1:34 PM